It wasn’t enough to have a deep, dark tan in the 1980s. Especially in the summer, we wanted our hair to look sun-ravaged as well. Sure, there were professional highlights you could get at a beauty salon, but it was a lot cheaper to go the DIY route. Plus, it was fun to know that while you were bronzing your skin, you were getting natural, beautiful highlights in your hair. It was like MAGIC! The most popular product was Sun-In. It was cheap and readily accessible, which meant that you didn’t have to talk your mom into buying it for you. You could scrape up a few bucks and buy some at Wal-mart and be good to go. Sure, I was born with black-brown hair, but there was no reason I couldn’t go blond, right? I’d just need the “Super” as opposed to the “Gentle” variety. 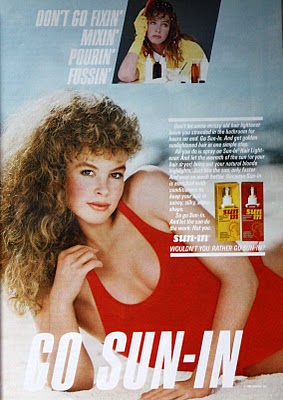 So, what is Sun-In, anyway? The ingredients are peroxide and water, with a smidgeon of other stuff, like conditioners and fragrance. Basically, you’re just looking at diluted peroxide, though. Once I figured THAT out, there was no stopping me. I combed some hydrogen peroxide through my straw-like locks, grabbed my bikini, and went to the backyard to broil in the sun. I also tried some lemon juice in my hair, but it didn’t work nearly as well as the full-strength peroxide. http://youtu.be/VXy6YjHQbJY I recall doing lots of Alberto VO5 hair treatments and using Aussie 3 Minute Miracle daily as a leave-in treatment. There was some pretty serious hair damage occurring on the top of my head and I had to counterbalance it with some serious conditioning. Note: to be fair, the current write-up for Sun-In (YES, it’s currently on the market) states the following: 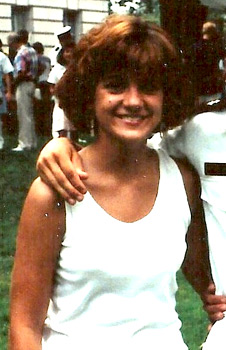 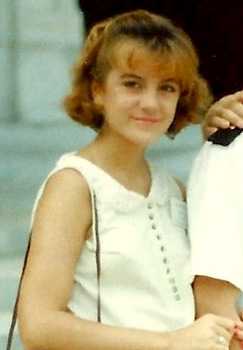 And the outcome was inevitable: amputation of the affected areas. 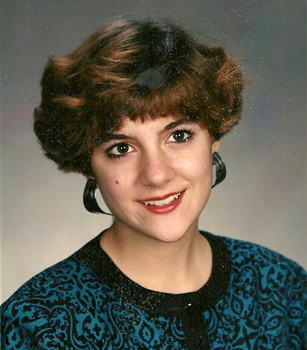 My hair was so frizzled, so damaged, so dried and split, that chopping it off was the only option. You can still see a slight orange tint to my naturally almost black hair here, in a 10th grade portrait. Perhaps Sun-In moderation would have saved me from the dreaded Mushroom Head cut, but it’s hard to stop when you’re getting those sexy, brassy results. Now, that’s some undeniably orange hair I was rocking during the mid-80s, and my knee-jerk reaction was embarrassment when I pulled these from my album this morning. However, I’m trying to look at the black-brown to orange hair transformation through objective eyes. Sun-In did succeed in making a marked color change, and who’s to say that burnt orange hair is unattractive? Perhaps not a color occurring in nature, but what’s wrong with that? It’s certainly a color that occurred in the 1980s, and I remember feeling like I was looking good when I sported that Sun-In glow. Editor’s Note: Like Julie, I used plenty of Sun-In in the mid-80s. The difference was that I started out with blonde hair. But, really, can you ever be too blonde? Well, I didn’t think so in 1986. So, I took my regular blonde to new, Sun-In-enhanced heights. Also like Julie, I figured out that it was mostly peroxide and concocted my own version – the ultimate DIY, allowing me to save the few dollars required to actually buy Sun-In. In a water spray bottle, I mixed lemon juice (call it 3 parts) and peroxide and conditioner (half a part each). Voila – homemade Sun-In. Warning: hair damage is an almost certain outcome of this home brew. Here are some great pics that show the Sun-In results when you start out with lighter hair. So awesome. 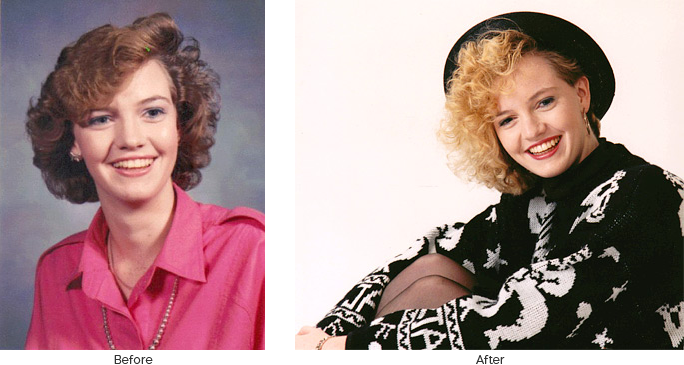 Big thanks for Leslie with The Breakfast Club Band for these great before & after pics!