Like Jell-o pudding and Cool Whip. Hairspray and perms. Rainbows and ponies. Some things were MADE to go together. Check out these fabulous crime fighting TV duos from the 80s. Some were all business, some were romantic, some kept us guessing, but they were ALL awesome teams. 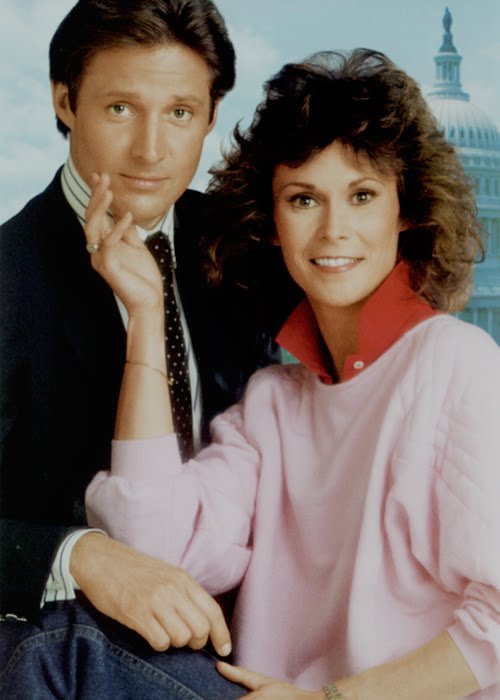 What’s that? Punks making trouble in Malibu? Shoplifting gang on Sunset Strip? Quick, send Ponch and Jon! CHiPs chronicled the adventures that tough-guy Ponch (Erik Estrada) and straight-laced Jon (Larry Wilcox) encountered as partners in the California Highway Patrol. Based in southern California, CHiPS had the added allure of motorcycles and mirrored sunglasses. Side note: Estrada didn’t appear in seven episodes due to money disputes, and was replaced by Bruce Jenner during that time. CHiPS aired from 1977 until 1983. Watch the CHiPs intro:

Hart to Hart (1979-1984) starred Robert Wagner and Stefanie Powers as the Harts, a wealthy couple who secretly work as detectives to spice things up. My favorite thing about this show was Stefanie Power’s hair. I totally coveted those fluffy auburn locks. The butler, Max, helped them out with their escapades, but it was really all about Jonathan and Jennifer. Watch the Hart to Hart intro:

Remington Steele ran from 1982 until 1987. My main memory of this show is one of frustration: How in the world did mild-mannered Laura Holt (played by Stephanie Zimbalist) land a hottie like Remington Steele (Pierce Brosnan)? Sure, she was the boss of the detective outfit, and Pierce Brosnan’s character had a shady past, but whatever: he was hot as sin and cool as ice. Mmm-hmm. Watch the Remington Steele intro:

Scarecrow and Mrs. King offered a slightly more tepid take on the battle against baddies. The 1983-1987 series starred former angel Kate Jackson as Amanda King, a divorced housewife and mother who bumps into Agency guy Lee Stetson, played by Bruce Boxleitner. Amanda helps out with a case, and gets hired by the Agency as a result. She and Lee (codename: SCARECROW) work together on exciting missions and, you guessed it, eventually fall in love. Watch the Scarecrow and Mrs. King intro:

Offering a feminist spin on the police duo theme, Cagney and Lacey starred Sharon Gless and Tyne Daly as two NYC detectives. CONFESSION: I never actually watched this. My teenage self craved romantic knowledge, and where is the romance in a show about two women cops, I ask you? However, I clearly did not hold the majority opinion, because the two actresses won the Emmy for Best Lead Actress in a Drama for SIX YEARS IN A ROW, which is pretty dang impressive. The show aired from 1982 until 1988. Interesting tidbits: M*A*S*H’s Loretta Swit played Cagney in the original TV movie, but couldn’t get out of her M*A*S*H contract to work for the TV show. Then Meg Foster was Cagney for the first season, but The Man decided she was too aggressive. Here, then, is the SECOND season intro with Sharon Gless as the Cagney you know and love. Watch the Cagney and Lacey intro:

1982 also brought us the world’s first human-Trans Am partnership in Knight Rider. Oh, yeah. David Hasselhoff was a billionaire detective, Michael Knight, who got a new identity and then drove around fighting crime in the Knight Industries Two Thousand, better known as KITT. KITT had artificial intelligence and a dry sense of humor, as well as all sorts of cool Batmobile-y tricks and a red light on the hood to let you know he’s thinking. KITT wasn’t just a radical car; with his intellect and skills, he was the perfect partner for Michael. The show aired until 1986. Watch the Knight Rider intro:

T-shirts and pastel blazers. Jan Hammer’s synthesized music. Ferraris and speedboats and drugs. Miami Vice took the country by storm from 1984 until 1989. The gritty crime drama influenced music and fashion in a big way. Sonny Crockett, played by Don Johnson, and Rico Tubbs, played by Philip Michael Thomas, were vice cops in Dade County. Crockett and Tubbs took care of business and looked totally bitchin’ in the process. Watch the Miami Vice intro:

Last but TOTALLY not least is what I consider the ultimate 80s partnership show: Moonlighting. The 1985-1989 series starred Cybill Shepherd as Maddie Hayes and Bruce Willis as David Addison. Maddie and David together run the Blue Moon Detective Agency. The wisecracking, bickering, and sexual tension combined to make Moonlighting an enormous success; the show launched Bruce Willis’s career. Al Jarreau’s awesome theme song became a hit in its own right. Watch the Moonlighting intro:

All these partnered-up shows were the bomb, and just listening to the fabulous theme songs takes me right on back to the eighties. I’m totally inspired: with a good partner, you can take on the world. Bad dudes, beware!