Sugar in the Morning … Breakfast Cereals of the 80s

Home » Sugar in the Morning … Breakfast Cereals of the 80s 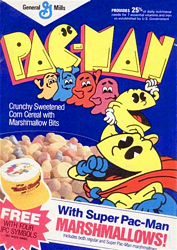 Bowl + Cereal + Milk = Big Smiles. What could be easier?

In the eighties, my mom initially tried to keep sugar levels low for us at breakfast time. However, when subjected to ultra-bland Rice Krispies, my brother and I improved the “lightly sweet” beige bubbles with generous scoops of white sugar. The gritty gray sludge at the bottom of the bowl helped the Krispies’ flavor TREMENDOUSLY.

Mom eventually threw in the towel and let my brother and me take turns choosing cereals. He opted for Fruity or Cocoa Pebbles, which grossed me out with their nasty milk-tinting properties. I stuck to frosted strawberry Pop-Tarts and Cream of Wheat (heavily sugared, of course) when Pebbles of any variety were the cereal offerings. My personal faves were Honeycomb and Sugar Smacks.

Join me for a heaping bowlful of 80s cereals that didn’t stand the test of time. Some might ring a bell, some might be totally unfamiliar, but ALL are guaranteed to give you a nice sugar rush…

Banana Frosted Flakes from Kellogg’s were around just briefly in the early eighties. They actually look pretty tasty, don’t you think? Frosted flakes + dried banana bits sound delish. Like regular Frosted Flakes, however, I’m sure they were prone to that dreaded cereal affliction: Instant Sogginess in Milk.

Fruit Brute, from General Mills, debuted in 1974 and was discontinued in 1983. It was replaced by Fruity Yummy Mummy in 1987, which subsequently only lasted until the 90s.

Their sibling cereals, Count Chocula, Franken Berry, and Boo Berry, by the way, are still around, although going forward they’ll only be available around Halloween.

Breakfast with Barbie cereal from Ralston Purina seems like it would be a clear winner, since little girls have loved Barbie dolls, like, forever. However, it was only around for a short time in the late 80s. I don’t remember it at all, to be honest:

Body Buddies from General Mills apparently tasted like Kix but was sweeter and had a stupid name. I don’t recall eating it, but this 1980 commercial is totally familiar: 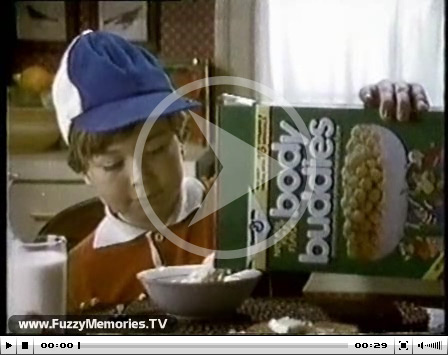 Kellogg’s C3PO’s cereal was a crunchy new force at breakfast! It looks suspiciously like Honeycomb to me, so it was probably pretty good:

Ralston Purina’s Cabbage Patch Kids cereal cashed in on Cabbage Patch frenzy. I guess one would bring one’s doll to the table and share a bowl, right?

Oh my goodness, I remember this commercial! So catchy! General Mills’ Circus Fun was on the shelves in the late 80s; this ad is from 1986. I also remember eating it, though, and finding it awful.

Post’s Croonchy Stars were cooked up just for you by the Muppets’ Swedish Chef, so you knew they were scroonchious. Mork, mork, mork! This commercial is from 1988:

Dinersaurs from Ralston Purina slipped right under my radar. I’m thinking they failed because they weren’t linked up with a specific TV or movie, don’t you? We can’t all be Count Chocula, after all. This commercial aired in the late 80’s:

Ralston Purina’s Dinky Donuts offered an irresistible contest in 1982. You could WIN AN ATARI! Sadly, the promotional contest wasn’t enough to grant the cereal longevity.

Donkey Kong Crunch was barrels of fun, but General Mills pulled the plug on production when the video game’s popularity began to fade. This commercial is from the early eighties:

BUT, before General Mills gave up on the Donkey Kong franchise entirely, they brought us Donkey Kong Jr. Cereal:

Ralston Purina revived the doughnut dream with Dunkin’ Donuts Cereal in the late 80s. This commercial features the early-rising cook from all those Dunkin’ Donuts ads. I just learned that Michael Vale, the actor who portrayed Fred the Baker and whom you see here, died in 2005 at the age of 83.

E.T. Cereal from General Mills featured E’s and T’s in E.T.’s favorite flavors, chocolate and peanut putter. Out of this world!

Ralston Purina’s Fruit Islands cereal was fruity-sweet and studded with apple bits, just like King Ayummayumma liked it. This commercial is from the late eighties:

Considerately, Ralston Purina thought of the dudes when it came out with G.I. Joe Action Stars in 1985. After all, guys aren’t going to be happy eating Strawberry Shortcake cereal and Smurfberry Crunch, right? Boys wanted MANLY sweet cereal!

Hungry? Hungry as a GREMLIN? You need some Gremlins Cereal from Ralston Purina. (Unfortunately this ad is broken off by an ill-timed channel change, but there’s enough there to get the idea.)

I have zero recollection of Halfsies from Quaker Oats, but wouldn’t it have been AWESOME to win your own arcade game? Further research indicates that it had half the sugar of those other kids’ cereals. Its demise, clearly, was inevitable.

Mickey Mouse Magic Crunch from Post was only around for a couple of years in the late eighties. Like the Barbie cereal, I’m confused about why this one didn’t make it. Probably not enough sugar. When will these cereal companies learn?

Morning Funnies from Ralston Purina was another late eighties flash in the pan. I think the funny pages flap on the box was genius, but, of course, the fruity crunch cereal was nothing new:

Ralston Purina introduced Nerds cereal in 1985. I think this looks really fun to eat, what with the Nerds flavor divider in the box, and I’m guessing the flavors were intense:

This Nintendo Cereal System commercial from 1989 is just creepy to watch: kids with television heads? Thumbs down, Ralston Purina. No wonder nobody’s mom bought this:

OJ’s cereal from Kellogg’s sounds yucky. Orange flavored cereal? Bleh. By the way, it’s totally unrelated to O.J. Simpson. This commercial is from 1985: 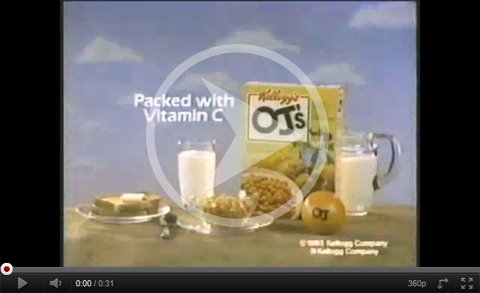 Powdered Donutz from General Mills were so good for you that even your COACH loved them! This commercial is from 1982:

And, of course, you might want some Chocolate Donutz, just to mix things up:

Ralston Purina’s Rainbow Brite Cereal was a yummy part of a complete breakfast. Bonus: it was chock full of colors not found in nature! This commercial features Murky and Lurky: 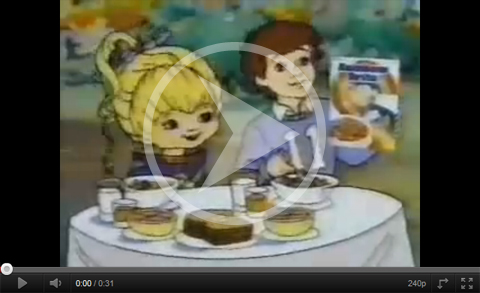 Rocky Road from General Mills bypassed the whole “fruity” and “good for you” thing that some kids’ cereals foolishly promoted. I have no idea why this one isn’t still around, yet it’s lost to the eighties:

Smurf Berry Crunch from Post came to us in 1982. Like all things Smurf, it was a huge hit for while. Smurftastic!

Smurf Magic Berries, also from Post, was another smurfy breakfast choice. They added marshmallow stars to Smurf Berry Crunch and changed the colors, so it was COMPLETELY different:

Strawberry Shortcake from General Mills hit the shelves in 1982. Berry sweet and delicious, no doubt:

Quaker’s Mr. T cereal made kids do backflips, apparently. I never thought of Mr. T as a gymnastics sort of dude:

With all that sugar and artificial flavor pumping through your veins, you were ready to tackle whatever the day threw your way! Nowadays, maybe you reach for some Kashi or grab a banana, but back in the eighties, we knew that breakfast was the most important meal of the day, and it had better be sweet. Can I have another bowl, please, Mom? AWESOME!