Ah, game shows. What better way is there to while away a sick day at home than with a marathon of “The Price is Right” or “Family Feud”? We were crazy about TPIR’s Bob Barker and “Family Feud’s” Richard Dawson in the 80s, fer sure, but let’s focus on those shows we loved back then that are no longer in production today. Thanks to YouTube and Game Show Network, these eighties game show gems are neither gone nor forgotten. Here’s a countdown to my personal fave of the 80’s game shows (hint: BIG MONEY!):

Win, Lose, or Draw was first hosted by Vicki Lawrence (of “Mama’s Family” and “The Carol Burnett Show” fame) and then by veteran game show host Bert Convy. It was like watching a fun little game of charades (except with drawing instead of acting) in your family room, with the additions of a live audience and some really perky famous people. Two teams, each consisting of two celebrities and one contestant, competed in the “quick-draw” game while kneeling on the carpeted floor.

Face the Music was a more traditional game show. I love the full orchestra and sassy interplay between smooth host Ron Ely and singer Lisa Donovan. Contestants listened to clips of songs and buzzed in to name the tunes, which then provided clues to the identities of famous people, places, or activities. Kinda complicated in retrospect, but a very fun show nonetheless.

Love Connection was hosted by Chuck Woolery. Sort of like The Dating Game re-envisioned for viewers of the 1980s, Love Connection hit on what today’s reality shows demonstrate: Americans LOVE being nosy about strangers’ personal lives. Each Love Connection guest was shown pre-recorded video interviews of three potential dates. The studio audience voted on who they thought the guest should select, and then the guest could choose to go with the audience’s selection or use his or her own discretion. After the (unchaperoned – gasp!) date, the guest would come back on and, in embarrassing detail, describe what had transpired. He or she then got the option of going back out with the first person or trying a different one, all in the hopes of making a lasting love connection.

Double Dare was the first incarnation of kid channel Nickelodeon’s ultra messy game show. The hit show, hosted by Marc Summers, premiered in 1986. Double Dare is often given credit for the young television channel’s success. In 1988, the name changed to Super Sloppy Double Dare, and in 1990 it changed once more to Family Double Dare. The show ended in 1993. The appeal of Double Dare was the gross-out factor: two teams of kids competed in silly physical challenges involving stuff like whipped cream, pies, and green jello.

Tic-Tac-Dough, everybody’s game of strategy, knowledge, and fun, had its first run in the 1950’s. Eighties kids, however, will remember Wink Martindale hosting the version that began in 1978. Martindale was replaced by Jim Caldwell in 1985, and then Patrick Wayne hosted the show in 1990 and 1991. Wink, however, will always be the Tic-Tac-Dough host of my heart. Contestants chose trivia subjects on the board; correct answers let them add their X or O to the board and got them one step closer to a tic-tac-toe style win. Like Press Your Luck, Tic-Tac-Dough had its own animated villain: the DRAGON. Oooooh, scary! 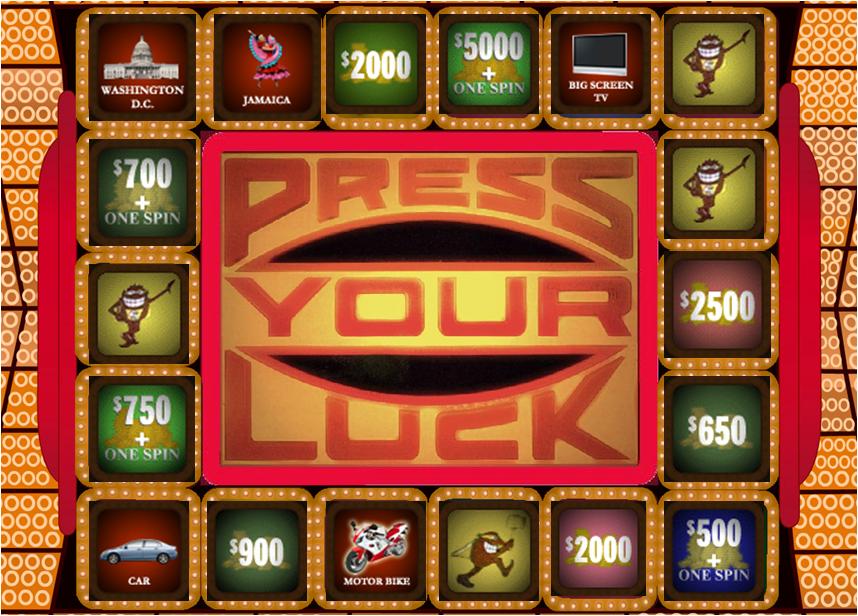 Press Your Luck was a frenetic game played around a flashing board. Peter Tomarken hosted the hugely popular show. Contestants answered trivia questions to earn spins on the board. Spins caused the board squares to flash and the pieces to interchange, so players couldn’t really judge when to halt the spin. Halting it on, say, the Hawaiian cruise or the $4000+Bonus Spin spot was GREAT. Halting your spin on a Whammy, however, would cause a cheeky animated imp to breakdance across the screen and steal all your accumulated money. Of course, what all the players REALLY wanted was Big Bucks. “Big bucks, c’mon big bucks, NO WHAMMIES!” I loved Press Your Luck for its unpredictability, its big prizes, and most of all for those diabolical little Whammies: