Saturday mornings – ahhhhh! Back in the 80s, we didn’t have, like, entire television channels devoted to cartoons, much less Netflix and Hulu to give us cartoons on demand. Puh-leeze. We had a few precious hours of cartoon time once a week on network TV, and, man, did we love them.

With a captive audience of roughly a bazillion-and-a-half American kids, health minded network execs decided to impart some useful lessons on those precious Saturday mornings. Brief educational segments got slipped in during commercial breaks starting in the early 70s and running through the 80s. We didn’t mind, because these PSAs were animated and catchy. We sang right along in our PJs while munching our Dinky Donuts on the family room couch.

Some of the most memorable cartoon PSAs featured this guy: 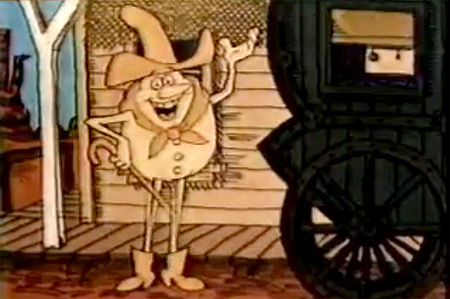 Time for Timer was one weird looking dude. The character’s premise was a little bizarro, too: Timer was in charge of a person’s body schedule, like when somebody wanted to eat or sleep or whatever. He looked like a big yellow ball with a huge nose, tall hat, and skinny arms and legs, and carried a big stopwatch. You know, to help with all that timing.

Timer was voiced by Lennie Weinrib. Weinrib was also the voice of tons of other characters from kids’ shows, including H.R. Pufnstuf and Scrappy Doo.

Here’s what is probably Timer’s best-known work: “Hanker for a Hunk o’ Cheese.” It astounds me that I still know the words to this:

And that I still remember feeling cheated that a round cracker and cheese wagon wheel will NOT roll down the counter without falling apart.

Dental health is important (duh!) so Timer taught us to brush and floss. The memorable part, of course, is the icky cavity goblin who wants to attack your teeth. Bleccch. Pass the Listerine, please.

Here, Time for Timer teaches us how to make popsicles with an ice tray, juice, and toothpicks. And I totally tried this, and it totally failed. It’s impossible to just poke a toothpick through plastic wrap without mangling it (well, it was for 8 year old me, anyway) and there’s no way those toothpicks will stay straight while you freeze them. And besides, have you ever had a popsicle made with only frozen juice? BLAND-O-RAMA. Sunshine on a Sticks were such a dumb idea. Did the creators actually try making these, I wonder?

But we were willing to forgive the yellow guy for the Sunshine on a Stick debacle. He meant well, at any rate, and he could sure carry a tune. Next, Time for Timer helped us understand not only WHY a good breakfast was important, but HOW to assemble one out of cold leftovers in the fridge. I guess mornings were getting busier and more moms were working, so kids needed to learn to fend for themselves. I totally get it, Timer, and I still love leftovers for breakfast:

And here’s “You Are What You Eat.” I remember being grossed out at the end of the clip when Timer is sorting chunks of food on the conveyor belt and the sign for Skin/Hair flashes up. I thought the person in question had eaten skin and hair (EWWWW!) and it was, obviously, rejected as improper food material. But yeah, now I get it: Timer was just sending the blocks of nutritive matter to BUILD your skin and hair:

Speaking of grossed-out-edness, Jimmy, a Like Totally 80s Facebook fan, pointed out that Time for Timer bears an uncanny resemblance to the Lamisil foot fungus creep, Digger:

And I do see it, but now I’m going to have to skip lunch after seeing the sidebar videos on youtube related to foot issues. Who documents and then shares their personal foot horrors? Gag. Me. With. A. Spoon.

With some helpful tips about snacking (and I’d have LOVED to have seen my mom’s face if I’d put a big bowl with random veggies, olives, and ice cubes in the fridge) here’s Timer once more:

There’s some fun Time for Timer gear out there, such as t-shirts featuring Timer and the wagon wheel and Time for Timer on his own, if you hanker for a hunk of wearable nostalgia.

For all his weirdness, Timer is for sure a beloved character from our collective childhoods. Check out this clip from Family Guy when Peter meets Timer and learns the reason for Timer’s quirkiness. (However, I remain skeptical. Timer would NEVER ingest anything unhealthy!)

Like Slim Goodbody, Time for Timer cared about our health and burned himself into our childhood memories. Next time you hanker for a snack, remember Timer’s sage advice and reach for something both nutritious and delicious. But please (see above snacking video) don’t ask Timer to make you a banana…