My husband, like me, is a child of the 80s. I asked him if he remembered Monchhichis, thinking that surely he’d have no idea what I was talking about. But NO! He immediately burst into that commercial jingle. You totally know the first couple of lines at least:

You could choose between the boy doll and the girl doll, but who are we kidding? We wanted BOTH of those bib-wearing monkey babies!

Confession: prior to researching for this piece, I had no idea how to spell the name of these little critters. If pressed, I’d have gone with three separate words: mon chi chi, or possibly two: mon chichi. And I’d have recognized that monchichi was a distinct possibility. But dude – I would never have guessed that an extra H would be in there.

The phenomenon originated in Japan. First there were the thumb-sucking monkey toys, created in 1974 by the famous doll company Sekiguchi. A couple of years later, the dolls were sold all over Western Europe by a variety of names: Chicaboo (U.K.), Mon Cicci (Italy), Kiki (France), Moncsicsi (Hungary), and Virkiki (Spain).

In 1980, the cartoon series “Futago no Monchichi” aired in Japan. Hanna-Barbera was quick to jump on the animated monkey wagon. In 1983, the company came up with its own ABC program, “Monchhichis”, about those darling little primates who lived in treetops. Wizzar, their leader, performed magic to defeat their enemies, those awful Grumplins of Grumplor.

Both the dolls and the cartoon were huge hits with American kids, so loads of retail items hit the shelves, including these puppets:

Today, collectors need look no further than their home computer to shop for the happy boy and happy girl Monchhichi dolls and related merchandise.

A girl doll all dressed for a day at school: 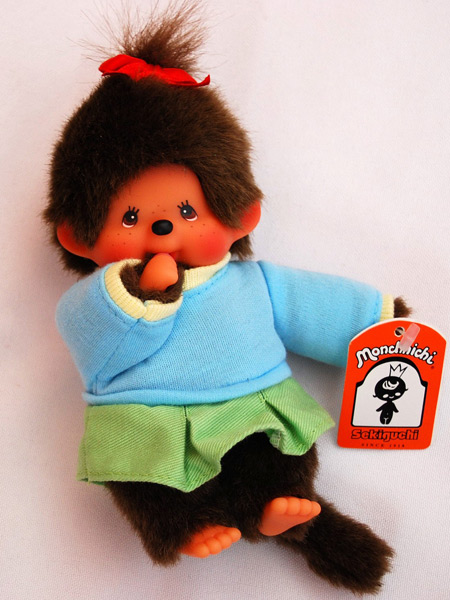 And a caveman Monchhichi boy doll: 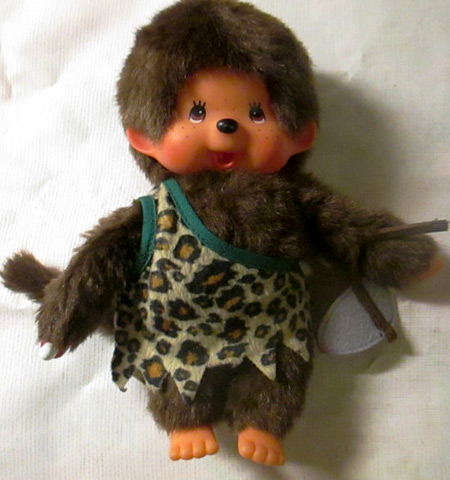 Photo credit: Thrill of the Hunt 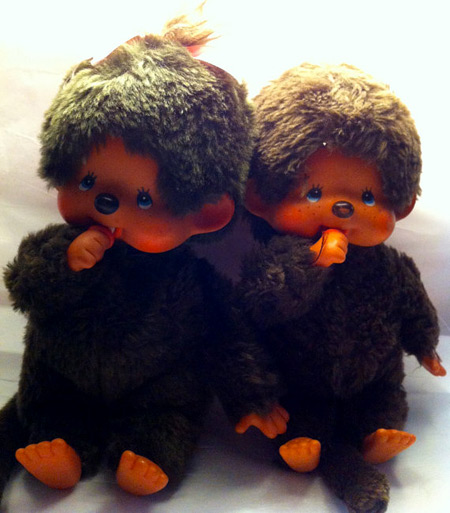 And all dressed up for the big day: 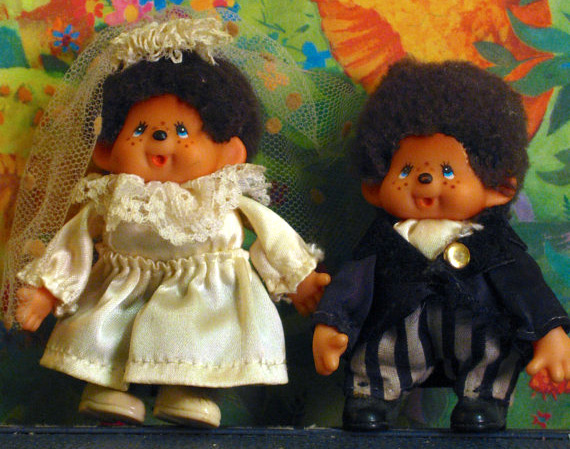 A rocking horse and chair for your monchhichis: 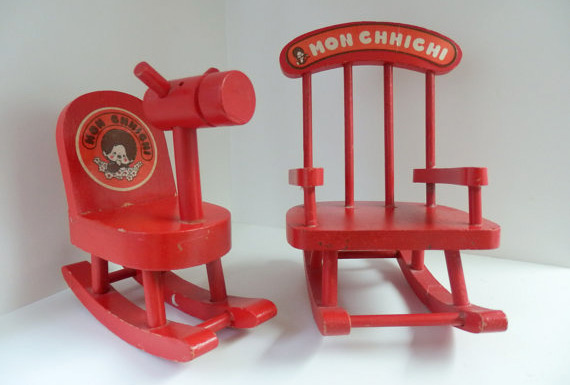 A paper doll book from 1983 that showcases their magical treetop home: 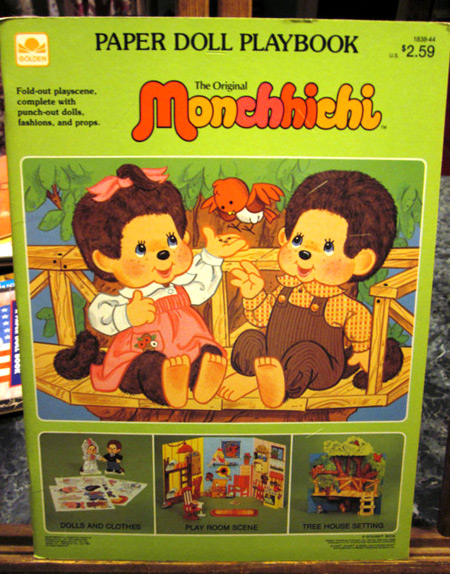 A sporty trio of figurines: 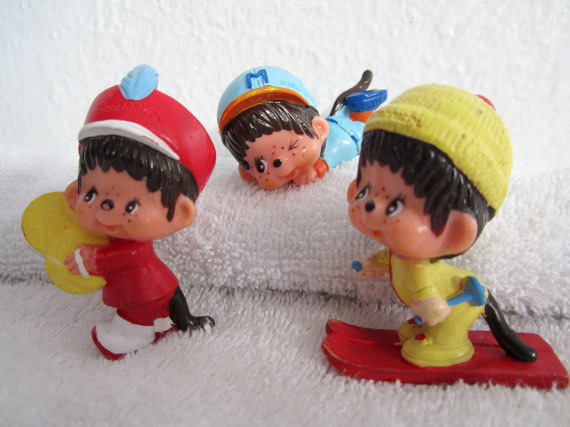 And a lone bat-wielding Monchhichi: 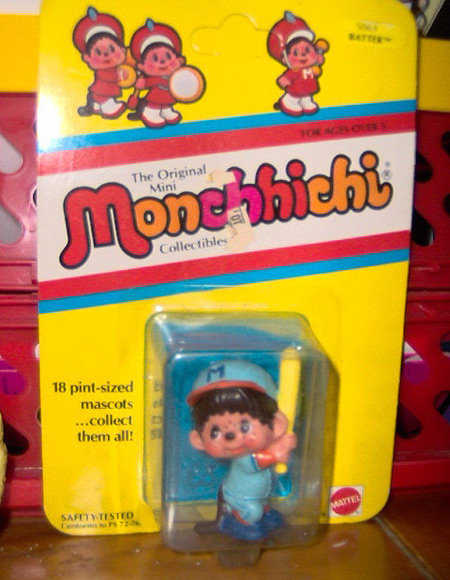 A 1981 jigsaw puzzle of Monchhichis at the beach: 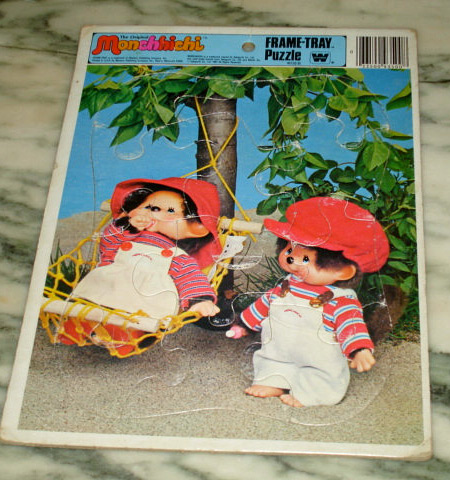 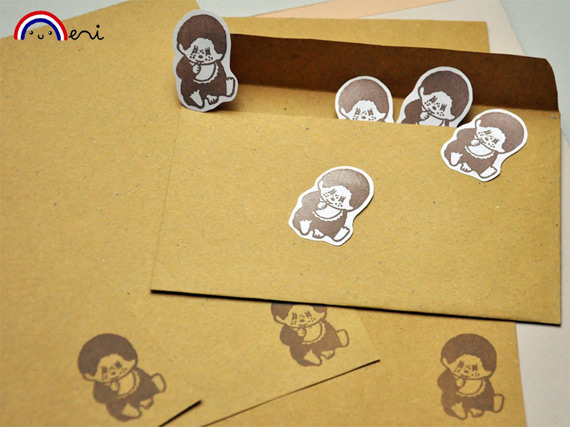 Here’s a vintage tune with a giggly conversational introduction to a disco-inspired Monchhichi song:

With all the Monchhichi mania past and present, it’s no surprise that you can even dress as your choice of boy or girl monkey for your next costume party.

Collect them, trade them, cuddle them and play with them, Monchhichis are undeniably 80s and, like, totally awesome. To put some pep in your step and a smile in your heart, here’s their theme song one last time:

(come on and sing along, you know you want to!)