Waterbeds in the 80s

Home » Waterbeds in the 80s

Once you’ve slept on a waterbed, you’ll never forget that wa-a-a-avy motion of the mattress. I can totally see why some people get motion sickness on them, although I never did. My friend Monica in elementary school had one and when I spent the night we slept on it. Swishy, sloshy and anything BUT firm, waterbeds lifted away your pressure points on an undulating pillow of squish that would make The Little Mermaid feel right at home.

1981 commercial from The Waterbed Outlet

The premise was simple enough: instead of a regular mattress, susceptible to lumps, dirt, bedbugs and whatnot, fill a tough casing with water. Place the mattress in a frame (preferably with a mirrored headboard), add a pad and bed linens, and voila! You’ve got a dream-inducing work of art.

1983 commercial from The Waterbed Company

Waterbeds were invented way back in the 19th century. They were great for people confined to bed because they helped reduce the incidence of bedsores. However, it was Charles Prior Hall’s 1968 design that helped the waterbed make a real splash. While a student at San Francisco State University, Hall experimented with various substances encased in vinyl as furniture cushions. Cornstarch was uncomfortable, while Jell-O decomposed (ew, grody!). Water, however, was ideal. Hall patented his mattress and named it “the pleasure pit.”

Waterbeds were totally a thing in the seventies. They continued to surge in demand, though, until they reached their peak popularity in 1987 with 22% of all U.S. mattress sales.

As any kid who rolled around on them can tell you, waterbeds were fun. They also reduced pressure on one’s joints and bones – just ask Atlas here:

Water mattresses didn’t get as dirty as regular mattresses. Sweat and mites could just be wiped off, so waterbeds were a boon for those who suffered from allergies:

However, if there’s one thing we’ve learned after living through the eighties, nothing’s perfect, dude. Waterbeds were horribly dangerous for little kids, who could slip between the squishy mattress and its firm sides. Waterbed mattresses had to be heated, which was relatively expensive. Water, it turns out, is really heavy, dude. Waterbeds required sturdy floors and had to be drained before they could be moved. Waterbeds could, and did, spring leaks, ruining floors and occasionally crashing through them. Bummer…

Also in 1983, Best Shots Waterbeds gave us this bitchin’ musical commercial for waterbeds:

Lest you think that waterbeds were all fun and games, take a creepy gander at this scene from 1988’s “A Nightmare on Elm Street 4: The Dream Master.” Joey, poor guy, falls asleep on his waterbed and learns that none other that Mr. Knifey Glove himself is lurking within the mattress:

Waterbeds are still around, although you might not recognize them. Today’s waterbeds are generally soft-sided, with channels for water instead of one big watery pouch. They’re safer, lighter, and cheaper to heat.

Many thanks to these friends of LT80s for sharing their vintage waterbed pictures with us. Love this room’s bitchin’ cobra artwork, wood paneling, space poster, and lion bedding on the waterbed: 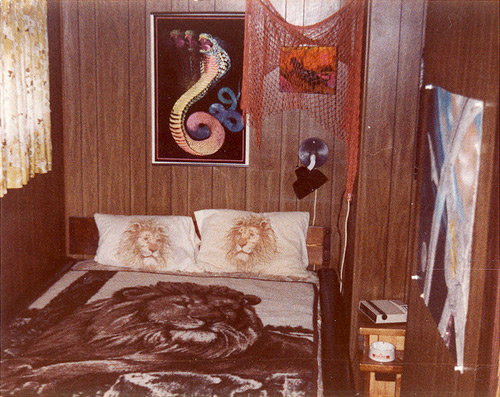 Aww, these smiles say it all, don’t they? Waterbeds were totally the most radical way to catch your ZZZzzzs in the eighties. Sweet dreams, kids of the eighties! We think you’re totally awesome, even if you don’t have that awesome lion bedding any more. 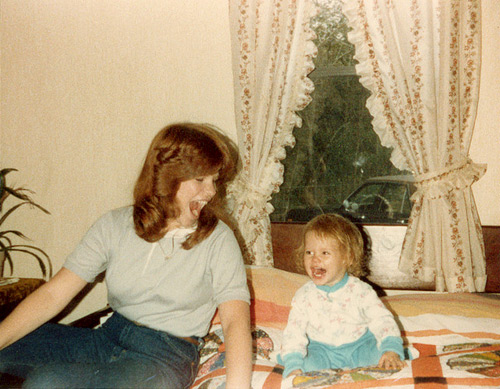