Top of My Chart – A Tribute to Casey Kasem

Home » Top of My Chart – A Tribute to Casey Kasem

As a child of the 80’s I was more than addicted to my fair share of television shows – Dance Party USA, The Greatest American Hero and the ultimate double feature Saturday night which included both The Love Boat/Fantasy Island. They all rocked my big-haired brain.

I was very busy losing my mind over music of the decade as well, everything from new wave to rap, pop to buttrock – only one man had a radio show that I was as devoted to as any television show; that I HAD to tune into each and every Sunday morning.

That man was Casey Kasem and that show was American Top 40.

Numbers never mattered to me as a child, ugh . . . I hated math. But listening to Casey count backwards from forty to one was required, serious listening. 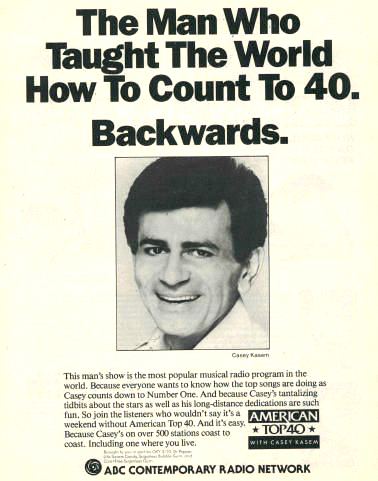 Casey had that old-school disc-jockey thing going on that nobody else had. That smooth, golden voice offering up important facts about a song or a band, trivia, detailed stories as to how a song or group came to be, and the legendary “long distance dedication.”

Notable songs I SO remember reaching the sacred number one spot on the show include “Mickey” by Toni Basil, “Centerfold” by The J. Giles Band and the theme song to “Miami Vice” by Jan Hammer.

We would drive to my grandmother’s house on Sundays after church and I remember getting in trouble more than once because I refused to get out of the car until I heard the drum roll and the big reveal of the number one song in the country. There was no pause button on radio back then, no internet to look up this information. If I missed Casey telling me that “Hello” by Lionel Richie was number one this week I would be so out of the loop with the other girls at the bus stop!

I’m guessing Grandma didn’t have a radio? I don’t know why I have that memory of sweating in the car waiting through all those commercials.

The long distance dedications were the best. Casey would read heartfelt letters from listeners that included stories of breakups, friendships, parents and pet deaths with a song to go along with it dedicated to that person. Or that dead animal. It was all very dramatic, and wonderful.

I still use his signature tagline, “keep your feet on the ground, and keep reaching for the stars” in everyday conversation. That’s not weird, is it?

Casey, I would like to make a long distance dedication. This time, to you:

youth with one man and one man only. He was reliable –

there for me every week no matter what. When I heard that

voice of his, I never wanted him to stop talking. He was

the “Robin” to my Batman, the “Shaggy” to my Scooby. The DJ

of my generation. Casey, would you please play, “Simply the

Best” by Tina Turner – because that’s what you are Casey,

PS-Rick Dees can suck it.