In the mid 80s everybody was dripping in gold, the girls and the guys. From name plates to chains to initial rings to charm necklaces to ID bracelets with your name on it, the gold rush was on during those high school years.

Having a B/F/F was like, the best thing ever. My best friend in 8th grade was Tracey, and everybody knew that. But in case you didn’t know that, we had this to tell you: 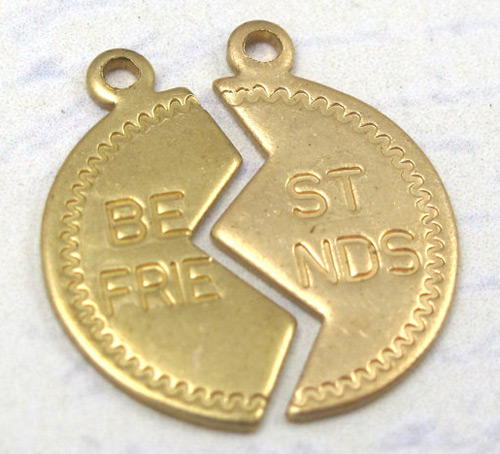 Of course there was the boyfriend/girlfriend version of this charm, anybody else wear a “mizpah” charm? 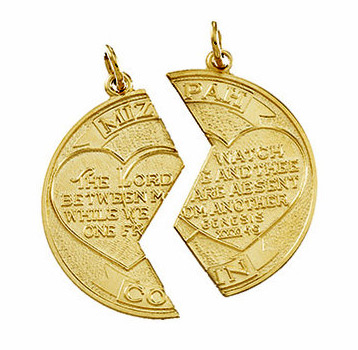 My boyfriend Lenny got me one of these; he wore half on a thick gold chain along with my nameplate, so everybody in the world knew that he was my boyfriend.

Seeing a mizpah on someone was a sign they were off the market, same as wearing your boyfriend’s letterman jacket or ID bracelet.

The charms would come slightly fused together, then you would ceremoniously break them apart with the best friend/boyfriend or girlfriend you’d be sharing the jewelry with.

Because we were going to be best friends FOREVER! Nothing would ever tear us apart! It was kind of like becoming blood brothers (or sisters) with each other—very exciting and dramatic!

Once high school started, Tracey and I started to drift apart; she found a new group of friends to hang out with as did I. No hard feelings, we just grew apart. But whenever I think of or see B/F/F written anywhere, I think of her and I think of our little round gold charm that we shared.

Oh, and I’m no longer wearing the other half of Lenny’s mizpah…his family moved away and eventually that half of a heart necklace was no longer around my neck. I mailed him back my half (again, with the drama) so he could share it with his next true love that would totally last FOREVER.