It happened before our very eyes: the 1980’s most astounding case of Missing Persons.

And when I say “Missing Persons,” I’m not talking about the early ’80s band responsible for the songs “Words” and “Destination Unknown.” I’m talking about another ’80s band, a slightly more successful one. In fact, thirty years ago, this band was quite possibly the hottest act in the world not named Michael Jackson. And then — POOF! — they vanished.

Basically, this band is the real-life version of Eddie and the Cruisers — if Eddie were not a Jersey bad boy but a flamboyant, cross-dressing heroin addict who sang about cerebral churches and lucky lizards. 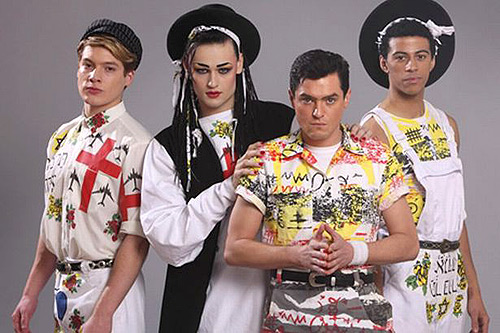 Fronted by the androgynous, headline-hogging Boy George, Culture Club had a remarkable run in the U.S. from 1983 to 1984 — racking up six consecutive Top Ten hits, earning a Grammy for Best New Artist, and becoming the first group to have three top ten hits in America from a debut album since this little band called the Beatles.

But then the group who sang “I’ll Tumble 4 Ya” took a tumble of their own — right out of the spotlight (in the U.S., at least). Now, this in itself is not noteworthy; many — if not most — bands pull a similar vanishing act after their moment in the sun. What is notable about Culture Club, though, is how far from the spotlight they tumbled.

Of course, Boy George was too iconic to be totally forgotten: David Lee Roth’s video for “Just a Gigolo” featured a George look-alike; Arnold Schwarzenegger name-dropped him in the 1985 film “Commando” (“Why can’t they just call him ‘Girl George’? It would get rid of all the confusion?”); and even as late as 1998, he was parodied in Adam Sandler’s “The Wedding Singer.”

But hearing an actual Culture Club song on the radio, even in the years immediately following their historic, chart-scorching run? That’s another story. Hey, I listened exclusively to Top 40 radio throughout the entire ’80s, and I can’t recall hearing any Culture Club during the latter half of the decade. (The only exception: Band-Aid’s “Do They Know It’s Christmas?” which features Boy George.) 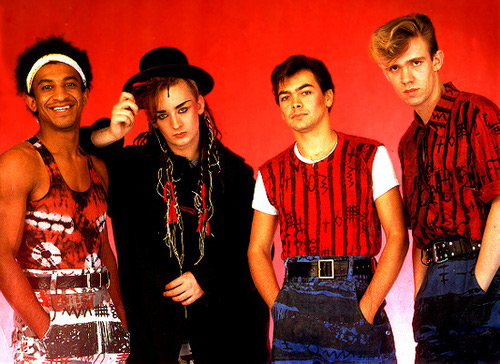 Even now, you may hear an occasional “Do You Really Want to Hurt Me?” on those retro “Back to the ’80s shows. But on “normal” radio? Sure, you’ll hear a bunch of other songs from that era — your “Sweet Dreams,” your “Every Breath You Takes,” even your “Footlooses”. But nary a Culture Club tune to be found.

Although the band officially broke up in 1986, the fact is that America unofficially broke up with the band at least a year earlier. Truly, it’s as if everyone woke up on some random day in 1985 and implicitly decided, “Let’s just pretend that whole Culture Club thing never happened, OK?”

Sufficiently stupefied by all this, I decided to put on my sleuthing cap, crack open this cold case, and try to answer the age-old question, “What happened to Culture Club?” Here’s what I determined:

Culture Club imploded: I know what you’re thinking: “You mean the band had too much, too soon, and that combination of money and fame led to in-fighting and drugs? Are you kidding? That has NEVER happened in the history of pop music!”

Alas, it’s true: the turbulent (and secret) relationship between George and drummer Jon Moss helped corrode the band from within, and George’s heroin addiction didn’t make things any better. In fact, in July 1986, Boy George told the London Daily Mail, “You don’t have to be a doctor to look at me and know that I’m dying. I am an out-and-out heroin junkie with an eight gram a day habit.” Bottom line: when assigning blame for Culture Club’s demise, start with Culture Club.

Consider: in late 1983, Culture Club’s second album, “Colour By Numbers,” spawned four singles, including their only number one hit, “Karma Chameleon.” But their third album, “Waking Up with the House on Fire,” released just a year later? Not so much with the spawning. 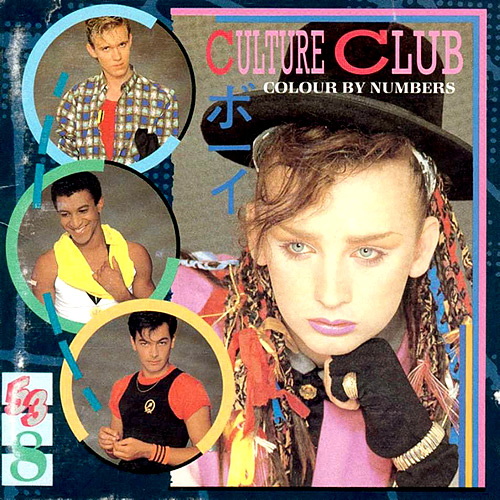 I can only recall two songs from that album: the insipid “War Song,” with the ever-so-insightful chorus, “War is stupid, and people are stupid…” (and those lyrics are pretty darn stupid , too); and the even less memorable (and even more un-listenable) “Mistake No. 3” — the name of which proved to be prophetic. Indeed, after their third album, American audiences seemed to dismiss any infatuation they had with Boy George and Co. as a big mistake.

It was never cool to like Culture Club. Those two reasons I listed have to do with Culture Club’s disintegration, but they don’t explain why the band disappeared from public consciousness. Why is it that you rarely hear Culture Club on the radio anymore?

The fact is, even in their prime, Culture Club was never “cool.” (In that respect, they were similar to Huey Lewis and the News — only admitting to liking Culture Club did infinite more damage to your street cred.) Hey, I was in eighth grade when “Karma Chameleon” hit the charts, and despite the fact that it went to #1, I don’t recall a single one of my peers who actually liked it (or, at least, admitted to liking it). How did the “Colour by Numbers” album sell 10 million copies, when the only person I ever knew who owned it was my mother?

A sense of shame always clung to Culture Club. But why? Why was it so embarrassing to admit to being a fan? I can only chalk it up to one thing: homophobia. Hey, we all have fond memories of the 80s, but it wasn’t the most enlightened time. Maybe the disappearing act was the public’s way of shoving Boy George and Co. back into the closet.

But that was then. Now, thirty years later, Culture Club may be ripe for a resurgence. Later this month, on March 25th, a clean-and-sober Boy George is set to release a North American album, his first album of original material in eighteen years. (The album was released last October in the United Kingdom, to rave reviews.) Moreover, a reunited Culture Club is reportedly writing new material and preparing for a 2014 tour.

Could pop music’s most notorious Missing Persons be ready to be rediscovered? After all, Americans love a comeback story, and a new coat of Nostalgia Paint can really do wonders. And let’s not forget Boy George’s prediction from thirty years ago, in the song “Miss Me Blind”: “I say you’ll miss me,” he insists, ” and you’ll always do.” Soon, we’ll see if he was right.