In Defense of Band-Aid’s “Do They Know It’s Christmas?”

Home » In Defense of Band-Aid’s “Do They Know It’s Christmas?”

In 1984, an instantly classic holiday song tried to save the world.  Thirty years later, it seems the song needs to be saved from itself.

I originally intended to write a piece outlining how the 1984 version of Band Aid’s “Do They Know It’s Christmas?” is infinitely superior to the 2014 version. (Sorry, One Direction guys, but it’s true.) But after some initial research, I realized the 1984 version is not quite as beloved as I thought.  In fact, many folks downright loathe it, for a bunch of compelling reasons:

Legitimate gripes, all. The song really does portray the Western world as the oh-so-altruistic White Knight out to save the poor and pitiful “other ones” in Africa.  And yet, I still have a soft spot in my 80s-loving heart for the song. 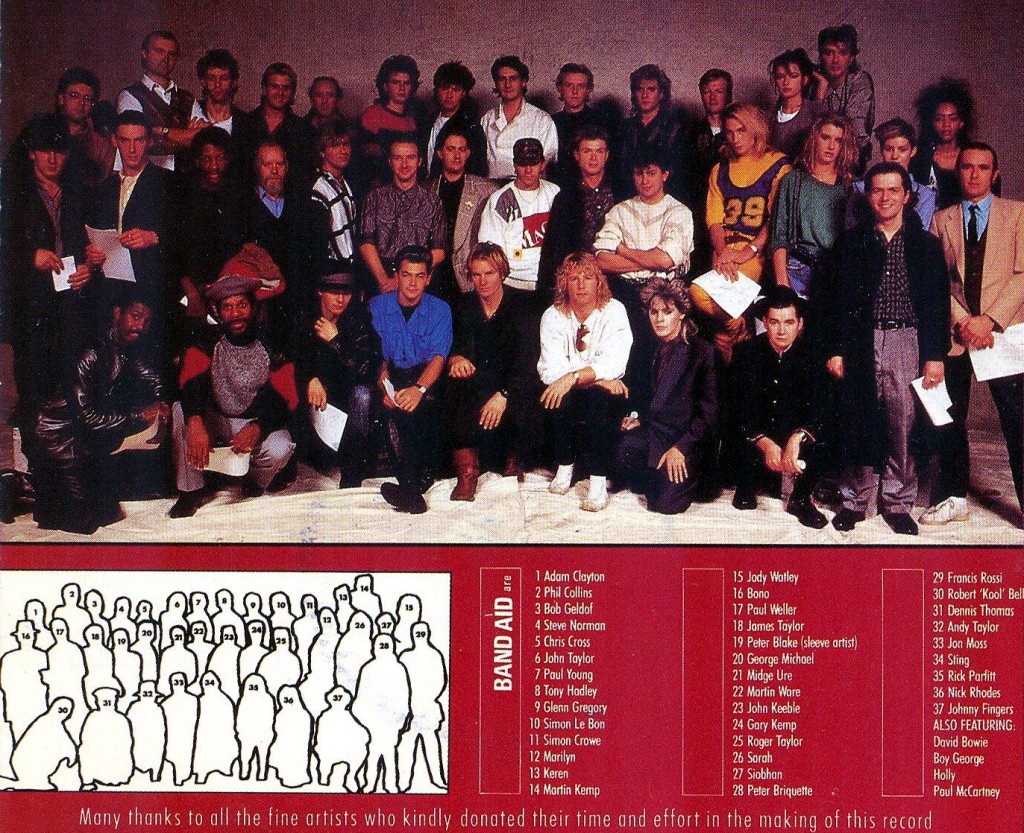 Maybe because I was fourteen when the song came out and thus too young to appreciate how patronizing the song was.  Maybe I’m just a sucker for songs that feature Sting singing “sting of tears.” Maybe I just really dig Phil Collins’s gnarly drum track.

Ultimately, despite its glaring faults, I feel there are still plenty of reasons you can enjoy “Do They Know It’s Christmas?”  Here are five:

Band Aid 1984 Was a Superstar Summit

Boy George, Simon le Bon, George Michael, Sting– these guys were HUGE in the mid-80s,. Heck, even Paul Young– who opens the song– may be residing in Obscurity Town today, but he had a major hit at the time with “Every Time You Go Away.”  The fact that Bob Geldof was able to get all of these big names (and big egos) together for one song was very impressive indeed.

(As an aside: When my fourteen-year-old son showed me the video for the new version of the song, I kept asking, “Who’s that singing now?”  Except for Bono, Seal, and Sinead O’Connor, I didn’t recognize anyone. Of course, my son didn’t recognize anyone from the 1984 version, so I guess we’re even. And speaking of Bono…)

Bono Belts It Out

Yeah, the line is problematic: “Well, tonight thank God it’s them instead of you?”  Even though the sentiment is obviously ironic, it’s still questionable. But, man, does Bono throw himself into it!  It’s as if he figured, “Hey, they’re giving me three seconds… I’m going to make the most of them!”

(That’s my favorite Bono, by the way– the exuberant, mulleted, pre-Joshua Tree Bono of yesteryear, as opposed to today’s blase, elder-statesman, “I-count-the-Pope-as-one-of-my-Facebook-friends” Bono.)

The Extended Version is Train-Wreck Entertainment

Back in the mid-80s, radio stations would play an “extended version” of the song, which featured spoken messages from folks such as the Bananrama ladies, David Bowie, and a babbling Paul McCartney– artists  who didn’t have solos or just couldn’t be there at the recording session. None of this adds to the song; the Frankie Goes to Hollywood guy’s creepy laughter actually detracts from it.  All- together unnecessary and at times even hideous, the extended version is bizarrely entertaining nonetheless.

Bob Geldof raised millions with this song (and millions upon millions more seven months later with Live Aid), but sadly, not all that money got to the people who needed it: African warlords ended up intercepting a large portion of the resources.

Geldof was much more successful in raising awareness. Case in point: when I was fourteen, I had no idea people were starving in Ethiopia.  Heck, I didn’t even know there was a place called Ethiopia.  Back then, my only knowledge of world geography came from playing Risk as a child. (Or at lesat, starting to play Risk as a child.  I never actually finished a game of Risk.  Then again, does anyone?)

The “world outside your window” message was one I definitely needed to hear. So did a lot of people back in the 1980s, apparently: in the wake of Band Aid came USA for Africa, Farm Aid, Comic Relief, and, yes, even Hands Across America.  Not bad for the “greed is good” decade, eh?

I fully concede that some of the lyrics are ignorant, nationalistic, and condescending.  And yet, I also think, as far as songs go, “Do They Know It’s Christmas?” is pretty darn good– and as far as pop Christmas songs go, it’s really good.

I’ll play the “back in 1984” card again: when I was fourteen and desperately seeking coolness, it was socially acceptable to like “Do They Know It’s Christmas?”  I don’t know if it was actually cool to like it, but at least it wasn’t uncool.

That was not the case two months later, when USA for Africa’s “We Are the World” debuted. Even though radio stations played “We Are the World” non-stop, I don’t know any teenage boy who admitted to liking it. The song was just too cheesy, too corny. Both songs had the same goal, but “Do they Know It’s Christmas?” was just more successful, in large part because it’s just a better song.

And now, I’ll end this piece by quoting from the “Do They Know It’s Christmas?” extended version.  In the immortal words of Bruce Watson, guitarist from the band Big Country: “Feed the People! Stay Alive!”