A sip or a taste of something can be a great little time machine. In fact, just seeing the packaging of a favorite food or a drink from childhood can make me thirsty for the 80s. Picture that giant can of Hi-C Ecto Cooler, makes me think of trading baseball cards, roller-skating, endless bike riding and being a kid.

But it’s the following sodas that send me back to the mall, the convenience store, or to “laying out” on the beach with my gang of girls. These were the soft drinks of 80s teen-dom.

The queen bee of diet soda, all hail Tab! Talk about packaging that can send you back in time, who doesn’t remember this hot pink can with the big T, small old-fashioned a and capital B? And, who can resist a tagline like, “Tab’s Got Sass!” Who couldn’t use just a little more sass? 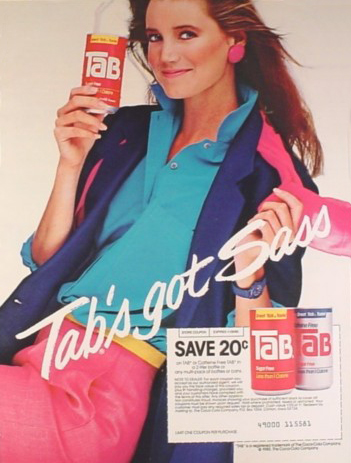 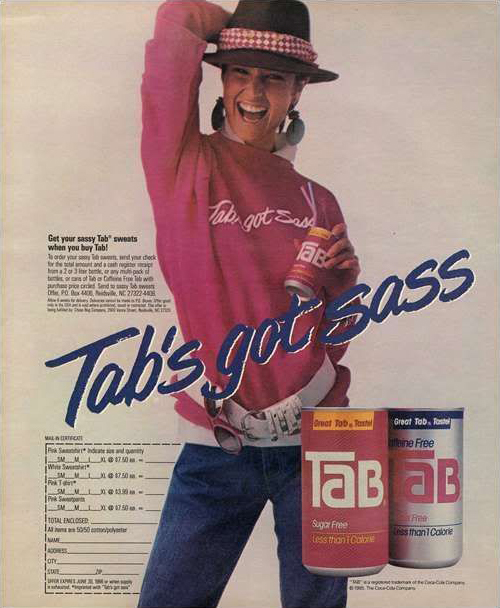 My mom always had a 6-pack of Tab in the fridge. While I haven’t had one in years, I know it’s still around. From what I remember, the taste was kind of lemony and very fizzy. It’s been around since the early ‘60s and is called Tab because it helps you keep “tabs” on your weight. Clever. Other diet colas came along and Tab went out of style, but it is still available and likely much loved by one of the older gals in your life. And, bless them, they have kept that same packaging design all these years. What was once out of style is now extremely cool and retro. 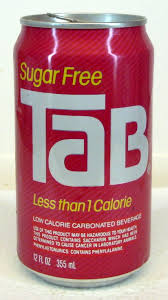 And, finally, you may remember in the commercials how the glass of Tab cinches in at the waist to show you how skinny your waist will be after drinking loads of Tab. Here’s a 1982 commercial starring Elle McPherson to remind you.

Why mess with the perfection that is/was Coca-Cola? On April 23, 1985, Coca-Cola did just that with the launch of a revamped (they made it sweeter among other things) formula called New Coke. New Coke went down as one of the worst ideas in the world of sugary-bubbly drinks ever. Coke may be it, but New Coke, not so much. 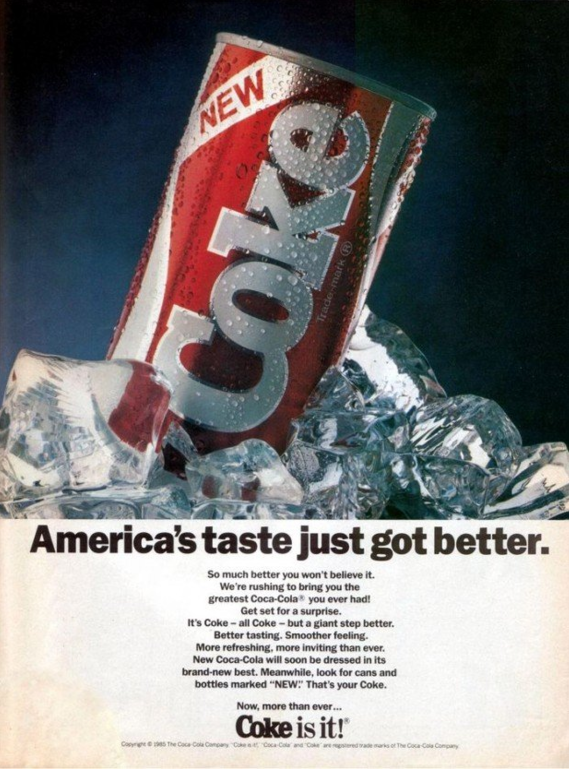 In fact, New Coke was such a flop and so many Coke-lovers’ reactions were so negative, they brought back the old formula within months (July 11th of that same year), renaming it Coca-Cola Classic. To add to the confusion after Coke Classic made a comeback New Coke stuck around and was officially renamed Coke II – further proof that the sequel usually isn’t as good as the original. In 2002, it was discontinued altogether. The moral of the story is, don’t mess with a good thing that people seem to really enjoy. Coke is it!

So, what if I wanted a carbonated beverage that came in fruity flavors? Like Strawberry, Black Cherry, Peach and Berry? Aww, heck, throw in a Cola flavor too – and Root Beer because I want to drink a clear Cola and Root Beer! 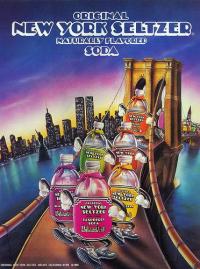 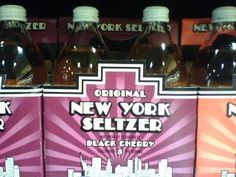 Original New York Seltzer came on the market in 1981 and boy, do these little bottles take me back. I would peel off the labels that were made out of Styrofoam or something, so it kept it rounded shape and wear them like cuff bracelets. Alas, the brand is no longer around; it made it through the early ‘90s and is now hanging out in soft drink-heaven with New Coke.

Whatever – you can’t get it anymore.

So savor that sip of whatever you’re drinking right now – because that fizz probably won’t last forever.