Last month, the FOX series Glee ended its six-year run. To coincide with the series finale, I envisioned writing a piece about all the 80s songs that appeared on the show. Examples: Artie getting out of his wheelchair for a dream-sequence “Safety Dance”; Finn the Quarterback singing a slowed-down “Girls Just Want to Have Fun”; and the New Directions performing “Don’t Stop Believin’”— along with just about every other Journey song, ever.

(As an aside: a co-worker once pointed out the irony of “Don’t Stop Believin’” being Glee’s signature song, since the show rather aggressively tested the audience’s “suspension of belief”– and not just because characters routinely broke out in song. Remember the episode where Will Schuester, clad in a white tux, literally walked across the school’s swimming pool to propose to Emma Pilsbury?)

Anyway, I began dutifully collecting 80s songs from Glee, when I remembered two important points: (1) I stopped watching Glee after Season 3; and (2) So did pretty much everyone else in the world. 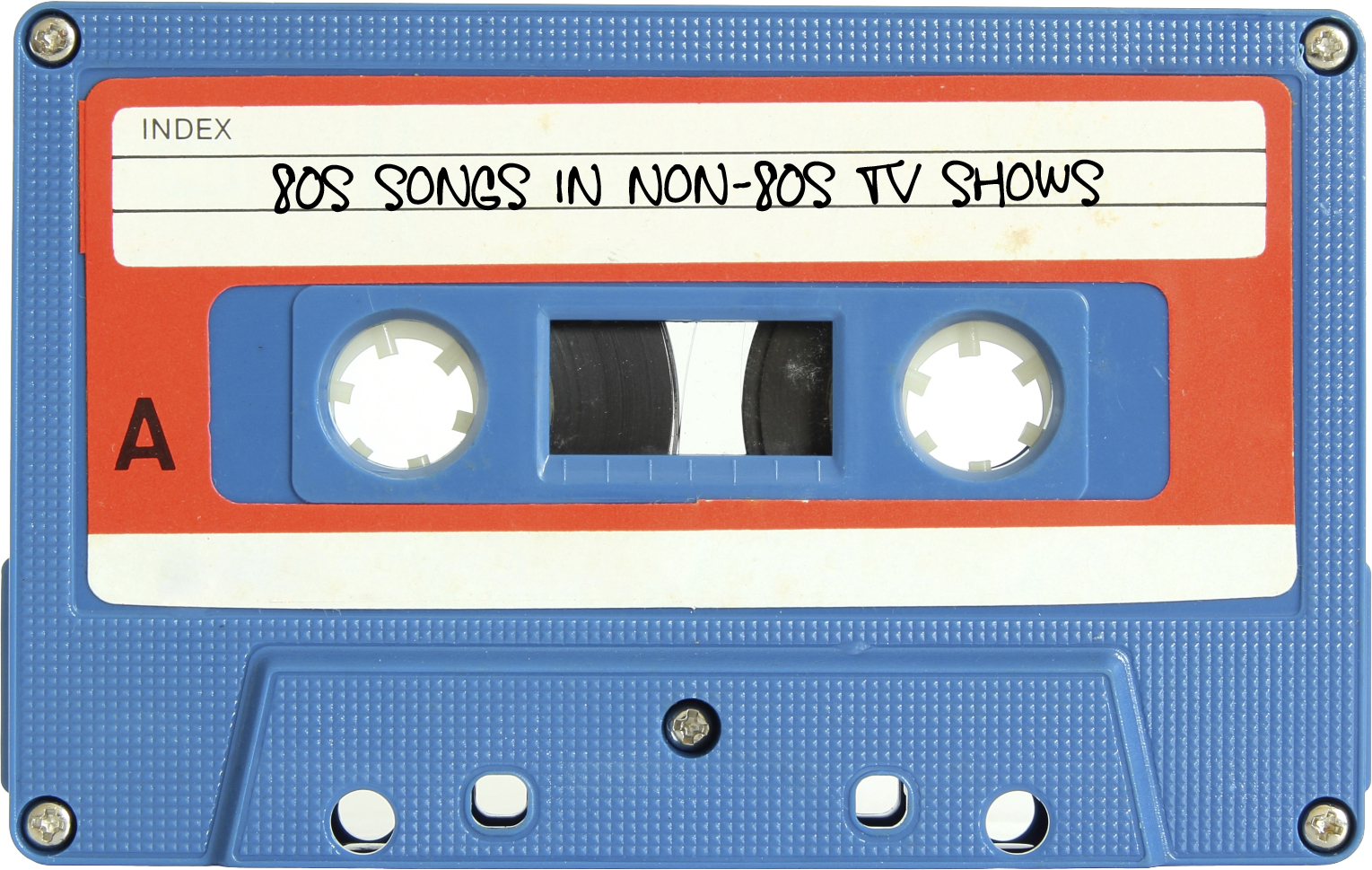 Then the Glee finale came and went with little fanfare, and the whole point of the article became moot. So I decided to take another approach: What are some other non-80s TV shows (besides Glee) that featured 80s songs?

I don’t mean shows that mention an 80s tune in passing or for a joke. I mean a show that used an 80s song in a significant way. So, the Parks and Recreation scene when Tom Haverford (on hold with a company about his defective under-eye cream) sings Alphaville’s “Forever Young” will not make this list, much as I adore it. With those ground rules in mind, here’s my list of six non-80s TV shows that used 80s songs…

The Office, “Islands in the Stream” (Dolly Parton and Kenny Rogers)

Quite a few 80s classics appeared on The Office over the years: Michael included Huey Lewis’s “Heart of Rock and Roll” and Tracy Chapman’s “Fast Car” on his list of Top Ten Bruce Springsteen songs; Pam sang Jeffrey Osborne’s “On the Wings of Love” (with Dwight accompanying on recorder) at a bird’s funeral; and Kevin was a member of not one but TWO Police cover bands, Scrantonicity AND Scrantonicity II.

Personally, my favorite Office/ 80s song moment occurred in Season 2’s “Email Surveillance.” Jim has a party at his house, which Michael crashes. In typical Michael Scott fashion, he awkwardly hijacks the karaoke machine and begs for people to sing with him. Finally, as Pam looks on affectionately, a sympathetic Jim joins Michael in a duet of “Islands in the Stream.” A great early Jim-Pam moment.

The New Directions may have performed a snap-happy version of “Don’t Stop Believin’” in the 2009 Glee pilot But two years earlier, the song was appropriated for a (potentially) darker purpose in the series finale of The Sopranos.

It’s the very last scene of the series: Tony Soprano sits down at a table in Holstein’s diner and plays Journey on the jukebox; patrons look at Tony; he eyes them back; Carmela and AJ join Tony at his booth, and they share some onion rings; Meadow is outside, struggling to parallel park her car; Meadow finally comes in the door; Tony looks up; Steve Perry wails, “Don’t stop–.”… And then… blackness. A firestorm of confusion and fury ensues, as the blogosphere explodes with “The Restroom Guy Whacked Tony!” conspiracy theories.

Some cried foul at that scene, some re-watched it frame by frame… but almost eight years later, people are still talking about it. And the use of that song– and the fact that the series ends with the word “stop”– is perfect.

Feeling sheepish (and maybe a little competitive) over the fact that Phil gives much better anniversary gifts, Claire decides to go all out and get Phil the most amazing present ever: she hires none other than Izzy LaFontaine, the (fictional) bass player of Spandau Ballet, to an put on an intimate solo performance in their own living room. See, Phil loves Spandau Ballet, and “True” was the song that was playing when they first kissed.

Only problem: Phil doesn’t love Spandau Ballet; in fact, he’s never even heard of them. (Phil and Claire’s “song,” it turns out, is “If You Leave” by Orchestral Maneuvers in the Dark.) Phil, hoping to spare Claire’s feelings, gamely tries to fake that he knows Spandau’s discography, in a scene that is equal parts humorous and touching. And Edward Norton is comedic gold as Izzy, especially when it becomes clear that Phil has no idea who he is: “This is false,” he says, “I’m not going to play ‘True’ for someone who’s false.” 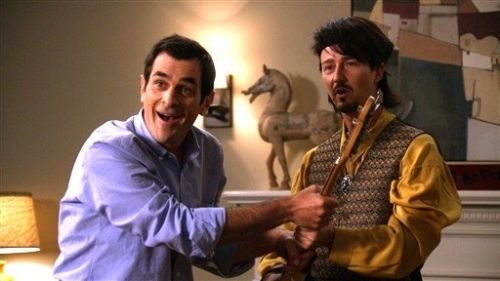 Sheena Easton’s 1981 hit was actually featured in two different Seinfeld episodes. In Season 8’s “Bizarro Jerry,” Kramer ditches his hipster doofus ways after he stumbles into a desk job at a financial services company, despite the fact that he has (as the boss soon discovers) “no business training at all.” “Morning Train” plays over a montage of corporate Kramer leading a presentation, squeezing into a crowded subway, and doing other “working-stiff” stuff.

The next season, in the “Butter Shave” episode, “Morning Train” was again played over a workplace montage. This one featured George working at playground equipment company Play Now, where everyone thinks he’s handicapped because he uses a cane. (At the end of the previous season, George had fallen down some stairs after slipping on a frisbee golf invitation.) The montage shows George reveling in his deception, tripping people with his cane and allowing a female co-worker to carry him down the hallway.

So, J.D. and Turk are heading to work when they encounter a guy who bears a striking resemblance to Colin Hay– a.k.a. “That Men at Work Guy”– sitting on a bench, playing “Overkill” on guitar. The guy then pops up at various places in the hospital: on a wheelchair, in a closet, in a hospital bed, and even in the morgue– as the dead body! All the while, he’s singing “Overkill”– that is, until Dr. Cox takes his guitar and smashes it.

And if all that sounds completely surreal to you… well, it’s actually pretty tame by Scrubs standards. (The episode, incidentally, is called “My Overkill,” and Hay’s acoustic version of the song is something else.)

The last few minutes of this episode (“Two Cathedrals,” the finale of season 2) feature “Brothers in Arms” being played over scenes of… well, of nothing much, to be honest: just a bunch of shots of Bartlet’s motorcade driving across Washington D.C. in a torrential rainstorm, interspersed with scenes of reporters pummeling C.J. Cregg with questions about the MS admission. But this might just be the best use of a song– not just an 80s song, but ANY song– on ANY television show. To me, it’s just the perfect marriage of music and image, and it reminds me the essential role music plays in storytelling.

Here’s how critical that particular song is to that episode: You know how some TV producers replace the original music when their shows come out on DVDs, as a way to avoid having to pay licensing fees? (For example, when the latter seasons of Dawson’s Creek came out, they changed the theme song, from Paula Cole’s “I Don’t Want to Wait” to some other, cheaper song.) Well, “Brothers in Arms” will NEVER be removed from this scene… because no one would dare. Everything else could be the same: same tension, same little moments (e.g. Charlie taking off his raincoat in deference to the President), same great culminating revelation (to the audience, at least) that Bartlet IS going to run again. Keep all that, but take away that song? The scene just doesn’t work– not as well, at least.

I know there are plenty of other non-80s shows that have incorporated 80s songs, but I thought these six would be a good place to start. If anyone out there has noticed any glaring omissions, please feel free to let us know in the comments below. Now, if you’ll excuse me, I have to watch The Sopranos final scene again. (You know, maybe the restroom guy didn’t whack Tony after all…)