Stairway to Heaven and the Last Dance Desperation

Home » Stairway to Heaven and the Last Dance Desperation

Donna Summers may have sung about the “last dance, the last chance for love,” but personally, the soundtrack to all of my “last chances” in the 1980s involved not the Queen of Disco but the moody strings of Led Zeppelin.

For me, Zeppelin’s “Stairway to Heaven” was an essential song of the 80s — which may seem weird, since “Stairway” is definitely not an 80s song, and in fact, is barely even a 70s song. (It was released in 1971.) But I attended high school from 1984-1988, and during that time, I went to my share of school dances — every single one of which ended with “Stairway to Heaven.”

An odd choice for a last dance, now that I think about it. With its rock-out ending and quizzical lyrics about pipers and May queens and bustling hedgerows, “Stairway” is clearly not a love song (though what kind of song it is, I can’t really say). 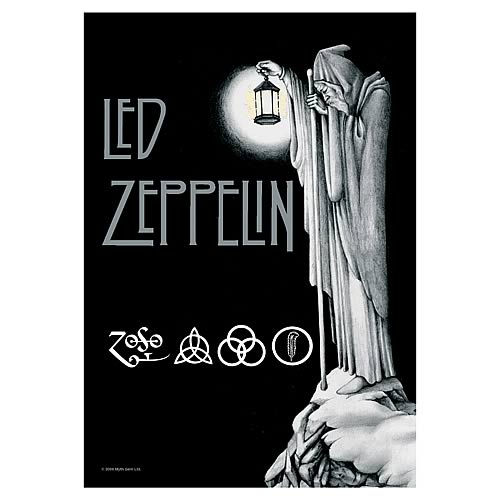 And it’s not as if DJs in the 80s didn’t have enough love songs to choose from: Bryan Adams’ “Heaven,” “Madonna’s “Crazy for You,” Journey’s “Faithfully”– all fine songs to accompany some last-dance snuggling.

Now, would those songs have assisted me in my never-ending quest to interact with a girl? Who knows? But at that point in my life, I needed all the help I could get.

Let me set the scene: I went to an all-guys high school outside of Boston, and for the dances, the school invited girls from all the local all-girls schools, which meant the gym was jam packed with big-haired girls with shoulder pads. (This was the mid-80s, after all.) But for me, it didn’t matter if there were three girls or three hundred; I couldn’t talk to any of them. I had no game.

So, the end of every dance — at least for my first two years of high school — went something like this (and I am going to use the second-person pronoun, in the hopes of making this seem like a universal rite of passage, rather than me being a pathetic loser):

It’s late on a Saturday night, and thus far, you’ve had a dance devoid of any actual dancing. You have avoided all the fast dances on principle alone (the principle being that you can’t dance) and have come up with excuses for all the slow ones. (“Billy Ocean… ugh.” “Ah, the song’s half-way over. I’ll wait until the next one.” “My, I’m suddenly exceedingly parched, I think I need a Coke at this exact moment.”) But then you hear those earnest initial notes of “Stairway to Heaven,” and you know the time has come. It’s now or never.

As you release yourself from the grip of the sweaty gym wall and hesitantly make your way across the floor, you remember your dad’s words of wisdom: “When the boys are looking, the girls are looking, too.” Only these girls seem to be neither looking nor particularly receptive to being seen. Instead, they travel in packs, of eight or more. Rarely will you find a girl separate from the collective. (A few years later, when you start actually socializing with girls, you’ll learn a related truth: girls are incapable of going to the ladies’ room solo.)

As Robert Plant sings “all that glitters is gold,” you suck it up, walk over to one of these impenetrable packs, and tap some random girl on her padded shoulder. (Not a classy move, but you have no choice: not only do girls travel in clumps, but they’re always facing inwards. You never really see the girl’s face until after you ask her to dance. It’s like an arranged wedding where the groom only sees the bride’s face after he lifts the veil.)

You ask the girl to dance, and she says yes — which you assume to mean she needs to do some community service by showing kindness to perpetually lame strangers. You introduce yourself, and ask her name and where she goes to school. And . . . that’s where the conversation ends. But that’s fine, because in your mind, this slow dance is not a means to an end. It is the end. You didn’t ask her to dance in the hopes of making a Chuck Woolery-like love connection. You asked her to dance so you can tell your friends on the ride home that you asked a girl to dance.

Of course, in this case, the term “dancing” is a bit of a misnomer; it’s more of a Frankenstein-ian waddle-in-place, as you shift your weight from one leg, to the other — making sure you don’t bend your knees or do anything to betray a modicum of rhythm. (In the ensuing years, you’ll perfect your technique and actually Frankenstein in a circular motion.) As for the girl, you hold her at arm’s length — not in a “make-room-for-Jesus” way, but in that uncomfortable, “when-will-this-song-be-over?” way.

The answer to that question, by the way, is Never. The song is eight minutes and one second long, after all — an eternity, by awkward-teenager standards. You suddenly remember your religion teacher explaining how playing “Stairway to Heaven” backwards unearths satanic messages, and you wonder if you have been condemned to a circle of Hell where you have to Frankenstein-dance with this random girl till the end of time, as Zeppelin plays on endless loop.

The music picks up and Plant starts shrieking, signifying the song is almost over. (You could respond to this shift in tempo by dancing a little faster, but that would be appropriate and maybe even cool, so you don’t.) Mercifully, the song comes to an end. The lights come on, and as you look around, you can see couples still stuck in mighty lip-locks; apparently, the “Stairway” Magic worked for them. Meanwhile, you just thank the girl and flee to the coat-check room. You never asked for her number, naturally; it didn’t even occur to you.

And that was the story of my first two years of high school. But in the fall of my junior year, I did have my own “Stairway” moment: I invited a girl to a dance, and during the last song of the night, we kissed. Now, granted, the next time I saw her, she dumped me. (I’m not even sure you can say we ever technically dated.) But no matter: I finally understood the Significance of “Stairway.”

And that Significance is this: back in the 1980s (at least, my 1980s), “Stairway to Heaven” was a gift, a final bone thrown by the DJs to all the awkward, pimply-faced teenage boys in attendance. It was the DJs way of saying, “Look, I know you haven’t talked to a girl all night. So here is eight minutes and one second to get something going. Now, get to it.” And most times, those eight minutes are an interminable slog, but in those rare, magical instances, they’re golden..

As a Post-Script . . . I’m back in high school now, as a teacher. And during my first few years on the job, I chaperoned a dance. And the last song of the night . . . was “Stairway to Heaven”! I couldn’t believe it! Two decades later, and DJs are still ending the night with Led Zeppelin?

So I approached the DJ and asked him about it. I told him my theory, that “Stairway” gives young lotharios those precious eight minutes to meet a girl. He paused and then said, “Well, I suppose. But I play it because it’s long, and I can use that time to start packing up my equipment.”

So there you have it. “Stairway to Heaven” is not magic; it’s strictly practical. Another childhood myth punctured. I guess all that glitters really is NOT gold.