You’ve most likely seen the viral memes that begin circulating once again every winter. 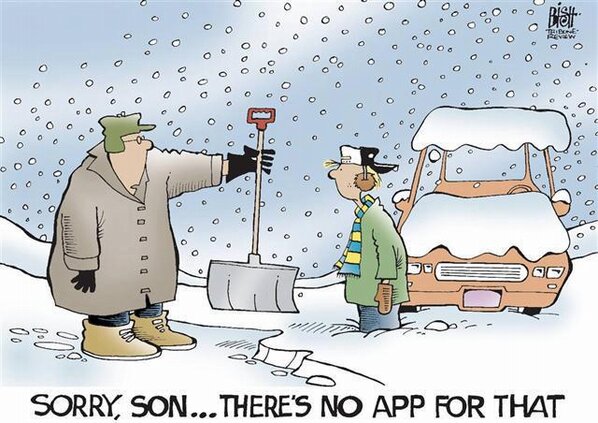 It seems like every cold season, folks reminisce about how children in the 70s and the 80s used snowstorms as an opportunity to make some extra cash, going around from house to house to offer their services shoveling snow.

Gone are those days, they say, thanks to the distraction of social media and video games and texting. Kids simply don’t want to get outside anymore, they speculate.

“As a kid growing up in Yonkers, N.Y., once a snow day was declared (minimum of 8-12 inches of snow for that!), we’d all meet outside with scrapers and shovels in hand, and offer to clean off cars and help dig out cars for people who had to get to work. The roads had been plowed, but they generally piled up snow against the parked cars so we really had to work to dig a wide enough trench for the car to get through. Oh and yes, we’d all get behind the car and help push it out into the shoveled path as well,” reminisces Free-Range Kids contributor Stacy.

Are kids too spoiled these days to get outside and do manual labor? Are they too distracted by the technology that keeps them busy while warm and inside?

One interesting perspective offered Saul DeGraw on Ordinary Times is that a potential cause behind kids not working during snowstorms could be inflation, or stranger danger, or a little bit of both.

“[Liberal American political blogger] Kevin Drum argues that the lack of snow shoveling by today’s youngsters is a matter of economics, mainly inflation. Drum’s argument is that wages for shoveling snow have basically remained flat but the costs of things kids like to spend money on have gone up. Adults are caught in a haze of nostalgia where coke and comic books cost a dime to a quarter and there were no 50 dollar video games,” says DeGraw.

Further, he says, a lot of parents are scared to let their young kids outside thanks to stranger danger. Stacy agrees, calling it an “infantilization of children.”

“Imagine it now? Wait? I hear an 11 year old can’t be left unsupervised in a library?” Stacy asks.

Then there’s the story about the two teens in New Jersey who were stopped by a police officer for going door-to-door offering shoveling services.

In order to continue, the officer said, they would need to get a $450 permit- to be paid each year.

“The story made national headlines and started conversations across the country about whether shoveling snow, especially by youth, should require a license. New Jersey lawmakers began looking for a better solution that would still curb solicitation and potential scams, but still be within reason,” said GenerationOpportunity.org.

Definitely sounds like quite the headache for a simple task.

What do you think? Why do you think kids these days aren’t getting outside to shovel like they did in the 70s & 80s? Weigh in by providing your opinion in the comments section.