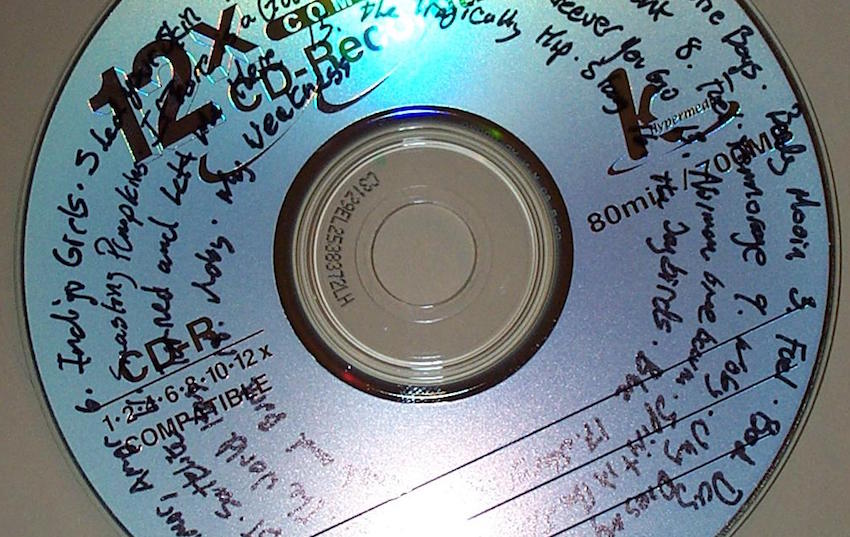 What could be so urgent that my former college roommate felt the need to mail to my home address instead of just waiting until the next time we crossed paths. Although, considering the fact we’d seen each other less than a handful of times in the fifteen plus years since he slept in the bunk above my head, maybe snail mail was the only legit option.

I immediately recognized the jewel case and too-perfect-for-a-male print on the front as my own. The CD was a mix of songs put together in an effort to get either my roommate, or myself, laid on those lucky nights when a young women thought it a wise decision to go back to our dorm room.

In those days, I pumped out mixes like it was a job. For a short time, it actually was, because selling burned discs at flea markets or on the street was legal and not regulated by the people running the market or the local authorities. I mean a college kid has to eat, right?

Besides mood music, I excelled at the creation of playlists for specific purposes. Romance — both requested and unwanted — was my specialty.

“You made a music mix for friends,” explains Daniel Nester, a professor at The College of Saint Rose in Albany, New York. “But usually they were for lovers.” Nester is an authority on many things musical and a few things embarrassing. He’s written extensively about Queen and how to be inappropriate and his new book, Shader, is a coming-of-age tale about music-obsessed kid growing up in the 1980s.

These days, a CD seems antiquated, but the idea and passion behind a mix is still the same and can be transferred to anyplace you listen to music — iTunes, Spotify, Pandora or your old but new again albums.

A solid music mix relayed messages — some intentional, some subliminal, more than often intentional and on a couple occasions, absolutely misinterpreted. The music on a mix CD was there when you couldn’t be, didn’t want to be or weren’t allowed to be because of either distance or a legal restraining order.

HOW TO MAKE THE PERFECT MUSIC MIX

First came song selection. Then order. A delicate balance, high-wire act, don’t lay it all out on the line on song number two because by song six she could be exhausted by your melodic expressions of love. General rules only my own — no more than two songs from the same artist, never more than one song of a particular album, abstain from anything already in heavy rotation and absolutely no f*cking songs from 90210.

Here are some tips for creating a solid music mix —

Pick A Mood — There are many different intention to the mix CD. It’s not just all about making another person miss you, want you or any other emotion you want them to feel. Choose one mood. Don’t bounce around. If you’re going to be morose, fill the mix with songs that will heave at the heart strings. If you’re keeping it light, opt for songs that bring the person to a happy place. Don’t bounce around from wrist gashing EMO rock to domicile shaking EDM.

Think Of It Like A Story — Every story has an arc. In the typical story arc, a character undergoes a substantial growth or change, usually in the final act. The end of a narrative arc is the denouement. It shows what happens as a result of all the conflict that the characters have gone through. In bland terms, a beginning, middle and end. Think of your mix as a story. Think of the relationship between you and the intended recipient. Find songs reflective of all stages of the relationship. Ask a lit major for help.

Keep Basic Tastes In Mind — It’s not just all about your preferences. This has to be a mix the other person will pop on for many different reasons, mainly because the music is so good. If you’re hardcore into a group or act that the person doesn’t care for too much, don’t drown the mix in those songs as an attempt to convert.

The :10 Second Rule – If you can’t make it ten seconds through a song without wanting to change it, don’t include it.

Our ‘Getting Some’ Mix

So what was on our CD? Well, keep in mind, this was the early 90s. There was a ton of R&B (Jodeci, Tevan Campbell, New Edition) that one song from Extreme (More Than Words), the longest song title ever written on a CD (I’ll Never Get Over You Getting Over Me) and a couple random songs from forgotten boy bands I’ve chosen to forget.

Overall, it was a respectable mix of music but I don’t ever remember it getting either of us laid though I can’t blame that entirely on the music.