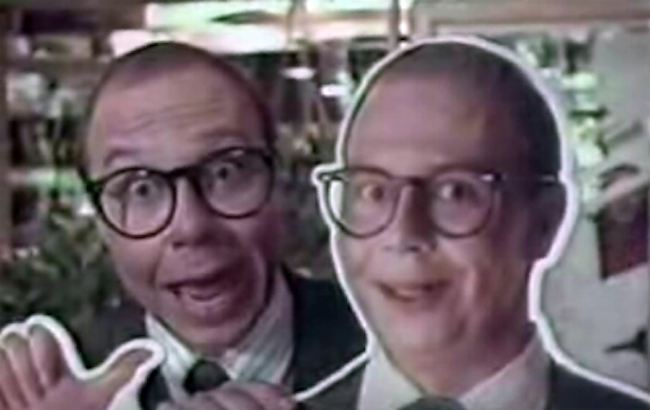 Herb. Perhaps one of the oddest mascots in fast food history. A bespectacled man who never “ate a Burger King burger in his life” was the focus of the fast food chain’s advertising efforts in 1985 and 1986. He was also the center of a huge controversy involving a 15-year-old teen from Alabama.

In 1985, Burger King announced the Where’s Herb? contest. The Herb character, played by actor Jon Menick, would randomly appear at Burger King restaurants across the country. If a customer spotted Herb at a Burger King, he or she would win $5,000. If Herb was discovered, everyone in the restaurant was entered into a drawing for the promotion’s grand prize of $1 million.

The Boy From Alabama Who Found Herb

Here’s the story from the archives of Time magazine:

The burger brouhaha started in March, when Jason Hallman, 15, of Bessemer, Ala., became the first person in his state to spot Herb in a Burger King store. The bespectacled actor was on a nationwide tour of Burger King outlets as part of a $40 million promotional campaign. The young man thought he had won a $5,000 prize, but Burger King, upon learning his age, denied him the jackpot and gave it to his friend David Brown, 16, who was with Jason that day. Reason: the rules of the contest, posted in all Burger King stores, said that winners had to be at least 16. The purpose of the restriction, said the company, was to discourage youngsters from hanging around Burger Kings during school hours.

Instead of quietly dropping the matter, Jason’s parents decided to complain to their state senator Mac Parsons. After investigating the dispute, the Alabama senate concluded that Burger King had never made the rules of the game clear in its advertising campaign. The lawmakers threatened to “invoke remedial legislation” if the company failed “to rectify the consumer fraud it has perpetrated.” Said Senator Parsons: “I feel what Burger King did was as bad as what the Grinch did when he stole Christmas.”

One of my favorite lines comes from this AP article back in 1986.

“She (Mrs. Hallman) said the company set the rule to discourage students from skipping school to try and see Herb.”

Really? Was that an issue in 1986? Kids skipping school to look for Herb.

After the complaint reached the Alabama State Senate it was then brought before the full State Senate, which passed a resolution condemning Burger King’s actions as “consumer fraud.”