Heading to the theatre to see “Ferris Bueller’s Day Off” would seem to be the textbook definition of redundant. After all, why leave the house and spend $12.50 a ticket to see a movie that has aired on television on a seemingly daily basis for the past three decades and has been packaged and repackaged into at least half a dozen editions aimed at the home video market? 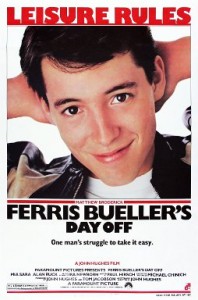 But few movies from the 1980s are more deserving of the big screen treatment than “Ferris Bueller’s Day Off,” which returned to theaters for two nights last month in honor of the 30th anniversary of its release (tomorrow’s the big day).

The movie’s ubiquity means there aren’t any previously missed nuances and deeper meanings to be gleaned from another viewing. About the only easter egg to be found last month was the package of Tums on Ed Rooney’s otherwise pristine desk—a sign he wasn’t nearly as cool and composed as he liked to fancy himself.

And here in the age of cell phones and social media, the bounds of believability over the movie’s premise and Ferris’ successful navigation of his day-long walk along the tightrope—already stretched for those of us who grew up with more attentive and suspicious parents than Tom and Katie Bueller—are completely snapped.

But it’s a testament to John Hughes—for whom this was his teen movie masterpiece—that we can still enjoy the movie in a vacuum. We’re nodding along in knowing fashion as we see Ferris feign a cough by using a keyboard synced to sounds saved on a 5 1/4-inch floppy disk. We can conceive of a teenager angry he got a computer instead of a car, and not both.

Viewing the film in its original environment, so to speak, does not diminish the delight we take in watching Ferris vanquish the clueless adults in his way. The snappy one-liners, distributed amongst core and secondary characters alike with impressive generosity by Hughes, are still as fresh and funny as they were three decades ago.

Hughes always had a gift for developing casts in which everyone in the audience could find a kindred spirit. But there’s a little bit of everyone in Ferris, his best friend Cameron, his girlfriend Sloane and his sister Jeanie.

We all wanted to be Ferris, yet we were probably a little closer to put-upon Cameron, or forgotten-about Jeanie, or literally along-for-the-ride Sloane. But Hughes made sure to allow each of the four main characters—and by extension, us—to enjoy at least one small victory.

There’s also fewer loose ends in “Ferris Bueller’s Day Off.” Whereas much of “Pretty In Pink” felt rushed and unexplained and the end alliances in “The Breakfast Club” seemed a little too convenient, there aren’t many question marks dangling at the end of “Ferris Bueller’s Day Off.” Other than, of course, what happened to Cameron when his Dad got home and saw his dream car turned into a pile of scrap metal.

Most of all, Hughes nailed the ethereal nature of a perfect day during the waning months of high school. While most of us didn’t play hooky in one of America’s biggest cities, we did have at least one of those spring days in which we realized, in real time, the magnitude of the memories we were making and the realization we could never replicate this with anyone else at any point in the future. Which is probably why we continue to enjoy reliving the one experienced by Ferris.