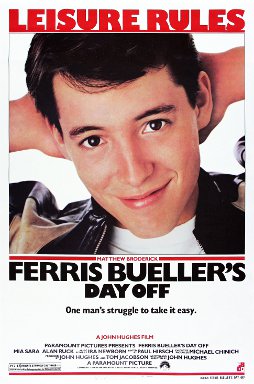 1.) John Hughes wrote the movie in less than a week. He had no time for our angst about writer’s block.

2.) The film generated two romances. Matthew Broderick (Ferris Bueller) and Jennifer Grey (Jeanie Bueller) began dating during the movie. And their on-screen parents, portrayed by Lyman Ward (Tom Bueller) and Cindy Pickett (Katie Bueller) got married after the movie. Alas, they were divorced in 1992.

3.) Alan Ruck, who portrays stepped-upon Cameron Frye, was 29 during filming. His birthday is July 1. So…yeah. Cameron Frye turns 60 next month.

4.) The iconic scene in which Ferris leads all of downtown Chicago in a rendition of “Twist and Shout” helped send The Beatles’ iconic song back into the top 40, a mere 23 years after it first charted and 16 years after the band broke up. “Twist and Shout” reached no. 23 in its second trip up the charts. To be fair, Ferris had a little help: Rodney Dangerfield also sang the song in “Back to School,” which opened three days after “Ferris Bueller’s Day Off.”

5.) In 1990, NBC tried spinning off the movie with the show “Ferris Bueller.” It only lasted 13 episodes but is notable today because it was one of the first credits for Jennifer Aniston, who played Jeannie on the TV show. In 1995, the two Jeannies would work together in a first-season episode of Friends, proving, yet again, that everything in life is connected to “Ferris Bueller’s Day Off.”