How much does it cost to buy…Garbage Pail Kids?

Home » How much does it cost to buy…Garbage Pail Kids?

Infuriating authority figures was a piece of cake in the 1980s. All you had to do was show up at home or school with a pack of Garbage Pail Kids stickers. 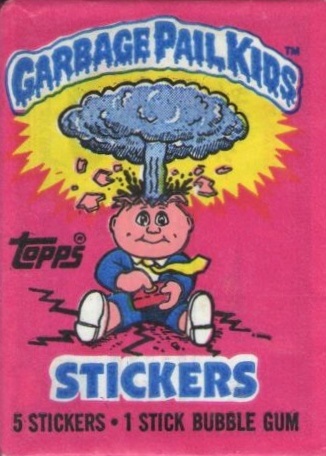 Oh, mothers and teachers in particular loathed those things, which of course only made them more attractive to us. Topps ended up producing five sets of Garbage Pail Kids (as well as a handful of 21st century sets) but was not responsible for “The Garbage Pail Kids Movie,” which nobody has ever seen but might still be the worst film of all-time. The trailer looks like Gremlins remade in hell.

Looking back, the gross-out element in those cards — just click here for a reminder of what you had as a kid — was pretty sophomoric, but also pretty innocuous, as far as offensive teenaged trends go. And we’d bet teachers today would have an easier time getting kids to put away their Garbage Pail Kids stickers instead of their cell phones.

If the previous three graphs made you hanker for a return to your days of youthful rebellion, the good news is Garbage Pail Kids stickers are pretty inexpensive to re-collect. (Unless you have some overseas editions, in which case, you might be able to treat yourself to a pretty nice vacation)

The first page of results for “Garbage Pail Kids” at eBay shows several inexpensive lots of stickers as well as some unopened boxes for those looking to really recreate the ‘80s experience. Maybe you can send your kid to school with a few for show and tell.