More Hits From Spring 25 Years Ago 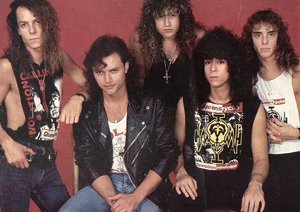 The lone hit by Keedy produced a sound and a video clearly influenced by ‘80s icons Madonna, Paula Abdul, Debbie Gibson and Belinda Carlisle. There are many worse artists to emulate, that’s for sure.

We’re not saying 1991 was weird, but Enigma hit the top five with a song equal parts Gregorian chant and dance beat. Inexplicable even if you experienced it live.

Perhaps the most unlikely no. 1 hit of an unlikely year. Extreme was a criminally underrated funk-metal band who had a small hit with its 1989 debut before the first two singles off its second album tanked. “More Than Words” was a Hail Mary that went for a touchdown and sent the album into the top 10, thanks, we presume, to middle-aged folks whose ears exploded upon hearing songs such as “Get The Funk Out” and “Suzy Wants Her All-Day Sucker.”

Good thing Nelson seized its window, because as lite hair metalists so good-looking they made Kip Winger look like a dog, the twin sons of Ricky Nelson had no chance long-term. But before grunge ended their 15 minutes of fame, Nelson had four hit singles (“More than Ever” was the third) off “After the Rain,” an album of damn near perfect power pop. Twenty-five years later, it’s OK to admit you liked it too.

If you put every late ‘80s dance song and video into a blender, you’d probably end up with “Hold You Tight,” which went all the way to no. 3. But you can’t get much more 1991 than a video filled with kaleidoscope images.

Wait, forget what we said about Enigma having the weirdest hit of the year. Queensyrche, a metal band with Pink Floyd leanings that had its first hit album in 1989 with the concept record “Operation: Mindcrime,” hit the top 10 with a gentle ballad about encouraging a child back to sleep after a bad dream. Also, there were subliminal messages. Hey we might have laughed back then, but the song works in the middle of the night with a fussy newborn.