Why Wasn’t ‘Streets of Fire’ a Bigger Hit?

Home » Why Wasn’t ‘Streets of Fire’ a Bigger Hit?

Thirty-two years ago this weekend, one of summer’s can’t-miss blockbusters opened in theaters. One viewing of the trailer for Streets of Fire suggested it had every ingredient to ensure it a lengthy and successful box office run.

It was directed by Walter Hill, who helmed two of the best movies of the previous half-decade in “The Warriors” and “48 Hours.” It had the dark, dangerous cinematography of those two hits. It had an awesome poster. 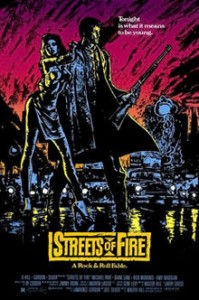 It was a “hard PG” movie, edited down from the R rating it had when the trailer was released, in hopes of finding a wider audience. It had a terrific Wagnerian soundtrack chock full of radio- and MTV-friendly songs. It had an obvious good guy saves the pretty girl angle.

If you’re old enough to read this, you probably remember thinking “Hey, I’ve got to see that.” But odds are you didn’t, at least in the theaters. “Streets of Fire” grossed just $5.6 million, good for 60th among 1984 releases, per IMDB. Its soundtrack yielded just one hit (Dan Hartman’s “I Can Dream About You” went top 10).

“Streets of Fire” has found a pretty devout cult following over the last three decades. But why didn’t it find the bigger audience that it deserved, and that Universal thought it would find? Pare said the movie was intended to be the first in a trilogy.

—It got buried in the best movie summer of all-time. “Streets of Fire” opened the weekend after “Indiana Jones and the Temple of Doom,” the same weekend as “Star Trek III” and the weekend before “Ghostbusters” and “Gremlins.” All four of those movies ended up among the top 10 grossing films of the year. Their combined take: More than $633 million. Something was going to get swept undertow. “Streets of Fire” was that something.

—Nobody knew what it was. A rock n’ roll fable, as the poster declared? A movie about warring gangs that takes place in an alternate universe? A modern western? A romance in which the boy pursues the girl that got away? It was actually some weird, surrealistic combination of everything, which meant it wasn’t easy to market the movie.

—It was ahead of its time. “Streets of Fire” was basically a 90-minute music video; a visual treat starring pretty people in a striking place. One-time music video director Michael Bay has made billions off this formula. But back in 1984, with MTV still in its infancy, America wasn’t used to the music video aesthetic playing out on the big screen. The Rotten Tomatoes review for “Streets of Fire” declares it is “More like a series of MTV sequences than a long-term narration” featuring a “super-thin story line.” Yeah? So?

“Streets of Fire” should have been a huge hit. Instead, to steal a line from the movie’s best song, it was over before it began. Thirty-two years later, see what you missed—or relive what you were one of the relatively few to experience—here: