Bob Ross is one of the greatest art personalities of the 80s. He was able to teach us all how to capture the special moments or sceneries with paint. Ross also had a distinct look with his signature shirt and puffy afro hairstyle, paired with a salt and pepper beard. So, we decided to piece together what we believe is the Most Awesome Bob Ross Costume Idea. 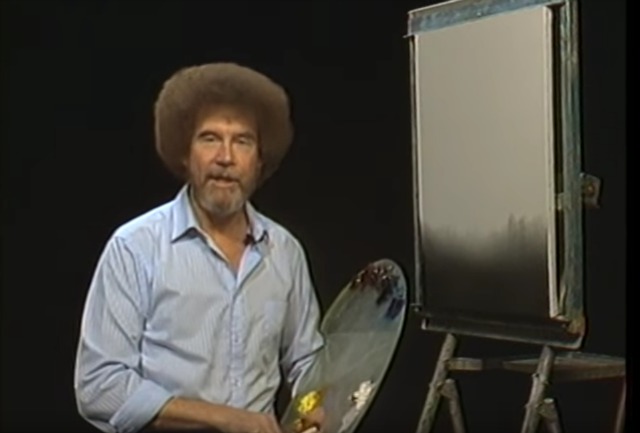 Let’s start off with that awesome afro that Ross sported. That’s as easy as finding a dark brown afro wig for men which could also be used by a woman who might want to transform into Bob Ross. Then it’s on to making sure you have the awesome beard down. There are plenty of costume beards out there.

After purchasing a beard you can just some dye to get the grey in all of the right places. The good thing about beards is they can also be trimmed to match the length of the person you are trying to embody.

The Most Awesome Bob Ross Costume Idea would not be complete without his signature light blue shirt with vertical stripes. The stripes were pretty subtle and that shirt was featured in the majority of episodes from Bob Ross The Joy of Painting.

You can finish the look off with blue jeans and a black belt, don’t forget to tuck the shirt in and have at least the first two buttons undone.