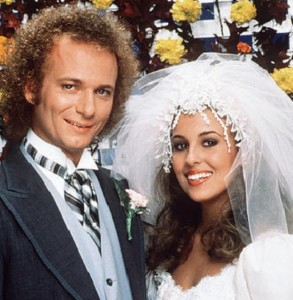 “You are cordially invited to celebrate the wedding of Lukas Lorenzo Spencer and Laura Webber Baldwin…” Thus, read the fictional invitation from ABC TV to the loyal viewers of their mega-hit soap opera, General Hospital. Can you believe that was thirty-five years ago?

The date was November 16 1981—another manic Monday. Ronald Reagan was president, “Physical” by Olivia Newton-John was playing on our radios, and Terry Gilliam’s Time Bandits was at the top of the box office. We were still giddy from the spectacle that was the royal wedding of Charles and Diana in July. However, a bigger wedding event was upon us.

On that day in TV history, began a two-day event that became the highest rated program in the history of daytime TV. Were you one of the thirty million viewers who tuned in to watch the wedding of the decade? I was. I faked a stomach flu so I could stay home from school and watch the nuptials. (How did we survive without DVRs in the 80s?)

Luke and Laura’s wedding was a big deal

Everybody who was anybody in Port Charles (or Port Chuck as Luke called it) attended the wedding, on the luscious grounds of the Quartermaine Mansion. Even screen legend, Elizabeth Taylor—a huge fan of the soap—asked to be written into the show just to attend. Rick Springfield, as Doctor Noah Drake, was also eager to be there; unfortunately, he had surgery that day. Yet, it would have been rad if he would have sung “Jessie’s Girl” at the reception. 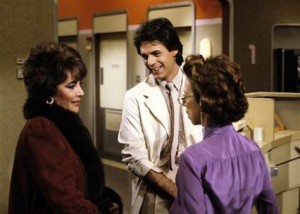 Of course, it wasn’t really about the wedding to diehard GH fans. It was the culmination of the tumultuous relationship that led up to the wedding. There was Luke’s controversial “rape” of Laura while in a drunken stupor at the Campus Disco. Not to mention, the love triangle between Luke Laura and bad boy Scotty Baldwin. The fact that Luke was in Frank Smith’s mob didn’t really help their budding romance. Then, there was that nasty business when the evil Mikkos Cassadine tried to freeze the world with his weather machine during the Ice Princess saga. I know, I know, it sounds like a soap opera. The saga of Luke and Laura even became a hit rap song, when The Afternoon Delights released “General Hospi-Tale” in 1981.

Now the wedding didn’t go off without a hitch. Laura’s step-sister Amy and Luke’s sister Bobbie were both vying to catch the bridal bouquet when Laura threw it off the balcony. However, it was Laura’s ex, Scotty Baldwin, who caught it. This led to Luke scaling down the balcony and the fistfight that ensued. But in the end, the happy couple drove off in a restored jalopy with the words “Just Married” on the back. 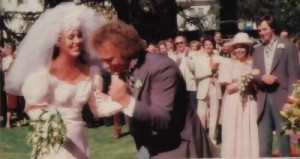 The beautiful Genie Francis, who played Laura, went on to marry Star Trek actor/director Jonathan Frakes. Throughout the years, she has returned to General Hospital numerous times, and will continue to play Laura through 2018. The handsome Anthony Geary, who played Luke, finally left Port Chuck in 2015, after a thirty-seven year run. He now lives in Amsterdam. 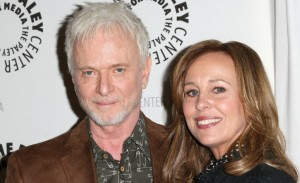 The wedding of Luke and Laura brings back so many wonderful 80s memories for me. What are your memories of GH’s wedding of all weddings?