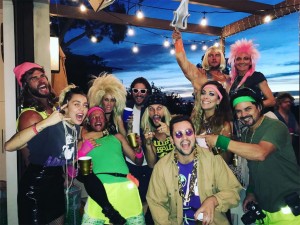 The Hunger Games‘ Liam Hemsworth took his fiancée, Miley Cyrus, “back in time” over the weekend. No, not in hot-tub time machine or a souped–up DeLorean. They were attending Liam’s big brother’s 80s-themed blowout.

It was Luke Hemsworth’s 36th birthday, and he wanted to celebrate it by throwing a party inspired by the decade of his birth—the 80s. This included Luke’s retro birthday cake, modeled after Rubik’s Cube and Pac-Man.

Liam and Miley got into the spirit of things by wearing rad, retro costumes. Miley was clad in a tight, leather skirt and a Madonna t-shirt. Liam was unrecognizable—not to mention hilarious— in his Fabio wig, sunglasses, big gold chain, and his “Let’s Get Physical” outfit: a yellow tank top, red shorts and a pink sweatband.

The birthday boy and Westworld star, Luke, pulled out all the stops with his superhero He-Man costume—big sword and all. He later wrote on his Instagram, “Fabulous secret powers were revealed to me the day I held aloft my magic sword and said ‘by the power of greyskull!’” 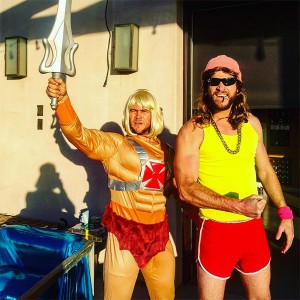 Samantha also posted tubular and bitchin’ Polaroid photos of the festivities on her Instagram account, along with this: “Like totally gnarly dude, the 80s are back! #80sparty.”

Many of the attendees likewise shared pics from the California party via Instagram, including Laural Barrett, who wrote, “Halloween just keeps on giving this year…Happy birthday @hemsworthluke ya legend!!” 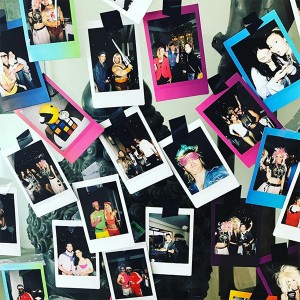 Looks like the 80s are here to stay…If celebrities have anything to say about it.