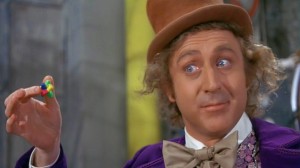 80s candy is in some cases gone, but in others it can still be found.

Remember the good ol’ days, when parents allowed their kids to eat candy, and they weren’t shamed for it by other parents? Oh, would that we could return to such an innocent time. Sure, our teeth were rotten. But, by golly, we had lots of energy.

Alas!  You’re an adult now, and you can eat all the sugar you want. Well, unless you’re a diabetic, of course. Fortunately, for the rest of you with normal blood sugar, you can find all your favorite 80s retro candy on Amazon. Heck, you buy everything else on Amazon nowadays…Why not retro candy?

Just reading the names of some of these candies may induce sugar-rush flashbacks.

Warning: If you eat Pop Rocks and drink soda, your stomach will boil and explode. That was the urban legend that many kids (me) grew up believing. I was greatly disappointed in grade school when we experimented this theory with my Cousin Luis…and he just burped. They do go fizz in your mouth, and that’s pretty awesome. 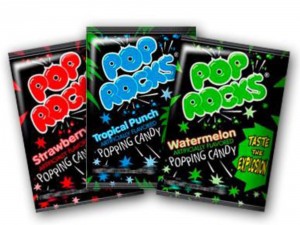 The cool thing about Candy Buttons is that you can literally eat them right off the paper. (Well, when you’re a kid, that’s cool.) When it comes to flavor, they’re a tad bland, but they’re still loaded with sugar. Candy Buttons come in the yummy flavors of lemon, lime, and cherry.

Pixy Stix are basically sugar stuffed in a straw. How do you eat them?  Well, you just pour them in your mouth. The sugar rush is quick and intense, but so is the crash that follows. The sweet and sour flavors include grape, Maui punch, cherry, and orange. Pixy Stix, the official snack of Toddlers & Tiaras. 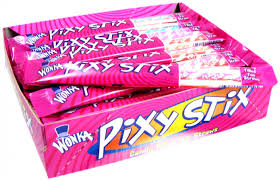 This candy is ingenious. Nik-L-Nip is fruit flavored syrup contained in tiny, multi-colored wax bottles. It’s three treats in one. First, you bite off the top of the bottle-shaped container. Then, you drink the fruity “juice” inside. And, the pièce de résistance, you chew the wax like gum. (Just don’t swallow the wax because it could be toxic.) 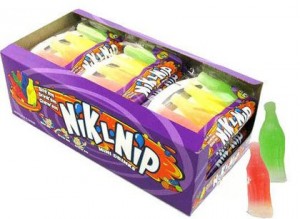 Ring Pop is the candy that you can wear. The fruit flavored lollipops come in the form of a plastic ring with a big hard-candy “jewel” on it. You simply slip on the ring and suck on it. They come in an assortment of flavors; and for Easter, you can get them in the shape of bunnies and chicks. 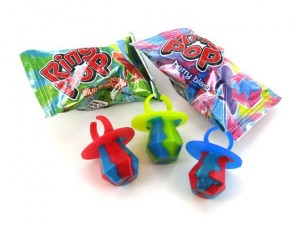 Wow! Both chewing gum and a temporary tattoo, all in one. Yeah, the potent taste of the gum is ephemeral, but you get a friggin’ tattoo—how cool is that. Packaged in a zebra-striped wrapper, it was known, back in the day, as the only gum with painted-on stripes.

At one time, the word Chiclets was synonymous with the word gum. Nowadays, the original candy coated gum is just another name brand. Nonetheless, they’re still as tasty as ever, and they will take you on a trip down memory lane. Although now available in every flavor you can think of, the original flavors were spearmint and peppermint. 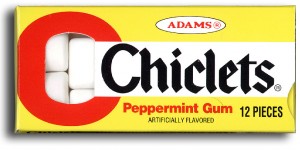 No, they’re not called Cow Tales because you sound like a cow when you chew them—although, they very well could. Launched in 1984, this long, gooey candy is made of chewy caramel wrapped around a cream center. The flavors include vanilla, chocolate, strawberry and, my favorite, caramel apple flavor. 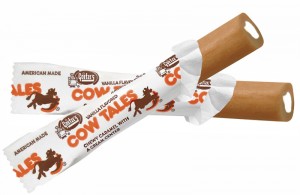 As the song from Gypsy says, “You gotta have a gimmick.” And this candy did. Created in 1986, this multi-flavored lollipop takes the form of a long cylinder. The cylinder retracts into a capped plastic tube that has to be “pushed” out for sucking. Cool, huh. One of their slogans was “Don’t Push ME, push a Push Pop!” 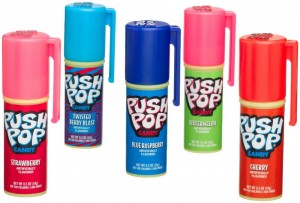 Remember the Everlasting Gobstopper in Willy Wonka? Well, the real life Gobstoppers aren’t really everlasting, but they last pretty long though. Also known as a jawbreaker, the Gobstopper is a big, round hard candy. They’re very tasty; just try not to break a tooth on one of them. 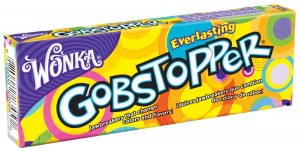 Which 80s candy was your favorite?