Who remembers the pudding pops of the 80s? If there was a signature dessert for the decade, the vote would surely go to Jello Pudding Pops. which were so popular this frozen treat hit $100 million in sales the first year it was sold.

Continuing to do well in subsequent years, pudding pops brought in $300 million in sales 5 years in. While the 1990’s continued to boast good sales of the pops, General Foods who first marketed the pops was bought out by Phillip Morris. Philip Morris then acquired Kraft Foods and merged companies creating Kraft General Foods. What did this mean for the infamous pudding pops? Well, the company wasn’t in the business of frozen food so no matter the profit the pudding pops brought in, it was never quite enough.

What happened to Jello Pudding Pops?

Jello was licensed to Popsicle in 2004 and the makers of  the fudgsicle (judged inferior by most pudding pop lovers) began to make their own version of pudding pops. Consumers didn’t like the new “Popsicle” shape given to pudding pops anymore than they liked the different texture. The sales never touched the original product and these cold treats haven’t been seen in store since about 2011.

Sorry to say you will most likely never taste the original recipe in their original shape again. But don’t fret- there is a better option. Make pudding pops at home! This is even better because you can test flavors and mix ins to you hearts content.

Try this twist on the typical flavors with Blueberry Swirl Vanilla Pudding Pops: 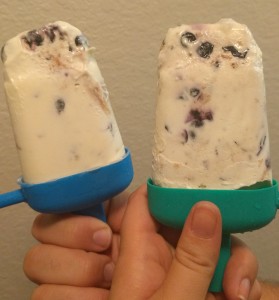 Whisk together the pudding mix and cold milk for a couple of minutes or until fully incorporated. Add in the cool whip. Using a popsicle making container or plastic/paper 3.5oz (or so) cups, add the pudding to the bottom and then a small scoop of blueberries. Stir together so you can see the berries and finish off the top with additional pudding on top.

Freeze for at least 5 hours or until the pops feel solid. Easily remove by placing the container into warm to hot water for about 30 seconds. You want to be able to push the pops out from the bottom so that you can easily pull the pop out.