Is Christmas Vacation The Best Holiday Movie Ever?

Home » Is Christmas Vacation The Best Holiday Movie Ever?

Of all the holiday movies ever made, it takes an 80s classic to be named the best of all time. According to Huffington Post writer Claire Fallon Christmas Vacation

Fallon makes her case and notes that many so-called Christmas movies are not even really about the holiday itself.

Christmas Vacation, on the other hand, could not be more pointedly about the highs and lows of the holiday season. Clark Griswold (Chevy Chase) spends the movie in a crazed quest to recreate the idyllic family Christmases he remembers from his childhood, hosting extended family in a too-small house and cramming enormous trees into a too-small living room. All the conflict of the plot arises from the ideal Christmas he holds in his imagination, and how many obstacles reality ― and his family ― present to making it happen.

The HuffPo writer also notes that in addition to being about the holiday, the film is actually good. It’s also a movie that can be watched during the holiday season by family members of all ages.

The overall themes are universally appealing, most of the humor was equally funny to me at 28 as it was at 8, and if you know when to hit fast-forward or manage to DVR a family-safe airing, you’re golden. It’s not as child-safe as, say, Home Alone

, but as an adult who would be fine with never watching Home Alone

is a perfect example of family debauchery and craziness of the holiday season. Clark just wants to get the family together for the holidays and Ellen can only see the calamity about to ensue. Between brother Eddie dumping RV sewage down the sidewalk grate to the constant one upping between the in-laws, you can see why Fallon made a case for the film.

is the best Christmas and holiday movie to watch this season:

1 Clark spends the entirety of the movie chasing after the “perfect” Christmas he remembers from his childhood, making this movie very relatable. Because, let’s be honest, who doesn’t idolize their childhood holiday experiences?

2 The family bashing quotes ring true to most of us and are too funny:

Audrie wonders, “Would it be indecent to ask the grandparents to stay at a hotel.”

Ellen states, “I don’t know what to say, except it’s Christmas and we’re all in misery.”

Clark makes it known he wants to avoid spending time with family and says, “Well I’m gonna park the cars and get check the luggage, and well, I’ll be outside for the season.”

3 The 80s is personified in this movie with Midwest sentiments by being both naughty and nice. Clark’s imagination causes him to “see” a naked woman dive into a swimming pool. He chats up the busty cashier and bumbles his words due to her sexiness. Overall making him truly naughty but completely harmless. And also Clark, as the sweet natured father and family man, who just wants the perfect Christmas for his family. He makes the best light show and accommodates everyone and their quirks as best he can. 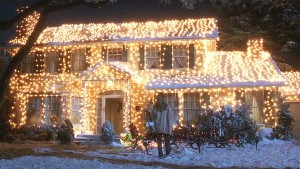 4 The Griswold home will always reign the house with the most Christmas lights. Ever.

5 Eddie is that one relative everyone just loves to hate. He is rash, dirty and rides the fine line of crazy with his daily antics. Like, “the shitter”: 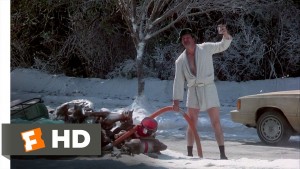 6 Christmas Vacation is full of the typical holiday catastrophes too. Clark decks the house out in lights and with his first attempt, the lights won’t turn on. Then, when they do, causing outages all over town.

At the beginning of the movie, the Griswold family attempts to procure their tree but Clark forgot a hatchet. The tree is nonetheless brought home, roots and dirt dragging off the back of the car.

Now that you’re convinced Christmas Vacation is the best holiday movie and you want to watch it, here’s the list for upcoming showtimes from TV GUIDE.