That voice. That hair. Stevie Nicks was the quintessential 80s girl if there ever was one and she remains as vital today as she was during her heyday (though there’s a little less drama now).

Rolling Stone Magazine dubbed Nicks the reigning queen of rock and roll and the people agree. Fans of hers are loving Nicks’ current tour, 24 Karat Gold. Touring together with the Pretenders, their schedule included 27 venues and dates.

December marks the last month of dates for this Fall tour as Nicks continues to perform through the end of New Years across the United States. 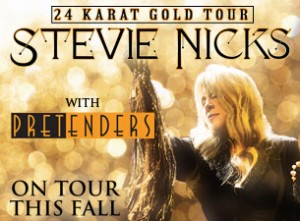 Nicks rose to success overnight after recording with Fleetwood Mac and would go on to a successful solo career as well. Though she went through long bouts having problems with various substances, she eventually sought out drug free treatment to overcome her battles. Upon completing rehab, Nicks said that she would never perform again. However, she did come back to the stage and is still performing, producing and singing to this day.

“Experiencing Stevie Nicks was super fun,” said Holli Rogers, an avid Nicks fan who attended the Chicago show at the United Center. “Both her and the opening act, the Pretenders, had an amazing energy. A testament to her being a true artist was seeing all the different age groups that attended the show.”