Is a Back to the Future Remake On the Way?

Home » Is a Back to the Future Remake On the Way? 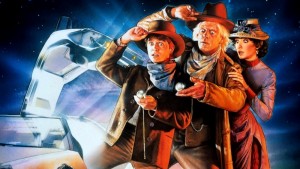 The Back to the Future Trilogy belongs to the 80s. And it looks like that’s where it’s going to stay.  That is if producer Frank Marshall has anything to do with it. In this age of bad movie remakes and reboots, Marshall gets the fact that some iconic movies just should not be touched. Back to the Future is one of those movies. This is what Marshall recently told Yahoo Movies.

“Yeah [we won’t reboot Back to the Future’], as long as I have my say. No, that one exists just like E.T–we’re never touching those. I love watching it. But how about we almost got the Chicago Cubs victory right?!”


Although their predictions of flying cars, rehydrated pizza pies, and Jaws 19 didn’t come true—not to mention hoverboards—the Cubbies finally ended their hundred-and-eight-year-old losing streak by winning the World Series in 2016. Back to the Future II was off by one year; nonetheless, their foresight was impressive—if not spooky.

Are all Back to the Future creators on board?

“Let’s face it, we’ve seen a lot of sequels that are made years and years later and I don’t think I can name one that’s any good, that lives up to the originals. I don’t think you can recapture it.”

Gale is correct on the dubious track record of some recent rebooted movies. These are just some of the iconic 80s remakes that paled in comparison to the originals: The Karate Kid, Arthur, Robocop, Red Dawn, and The Fog.

Forrest Gump director, Robert Zemeckis, further reassure diehard Back to the Future fans earlier this year. He stated that even if Universal Pictures wanted to, a remake of Back to the Future could not go ahead without the approval of himself and writer Bob Gale.

That is a relief. Too bad the producers of the upcoming Dirty Dancing TV-movie remake did not get the memo. Let us keep our fingers crossed for that one.