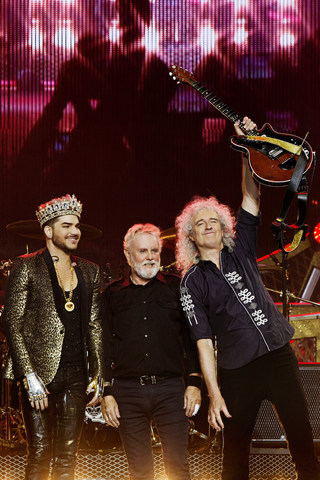 After wildly successful and sold out tours throughout Europe, Asia, Australia, Latin and North America, Brian May, Roger Taylor + Adam Lambert will debut a brand new show specially designed and created for this outing, bringing fans all their favorite Queen hits, like “Another One Bites the Dust,”  “Bohemian Rhapsody,” “We Will Rock You” and “We Are The Champions.”

Since their first meeting on the final of American Idol in May 2009, Queen + Adam Lambert’s combination has been recognized worldwide with sold out shows in every part of the world.

2016 saw Queen + Lambert perform fifteen shows across Europe headlining major festivals such as Portugal’s Rock in Rio Lisbon where they played to 74,000 people, the UK’s Isle of Wight Festival, by far one of Britain’s most prestigious and successful music festivals with a heritage of such headliners as Jimi Hendrix, The Who, Bob Dylan, The Rolling Stones and Paul McCartney, as well as sold out arena shows, such AS Barcelona’s Palau Sant Jordi Olympic arena.

Queen + Adam Lambert “Somebody To Love”

Queen + Adam Lambert revved up again in the fall of 2016 to take on a series of sold out dates across Asia which saw Queen perform for the first time and introduce Adam Lambert to some new audiences in Hong Kong, Bangkok, Shanghai, and Singapore including three nights at the famous Tokyo Budokan theatre where Queen first appeared in 1975 and induced fan mayhem.   Similar scenes greeted them on this return.

Queen + Adam Lambert topped off 2014 by performing to an audience of over 12 million TV viewers when they performed live for UK BBC Television’s New Year’s Eve spectacular Queen + Adam Lambert Rock Big Ben.  In the subsequent 24 hours ‘Adam Lambert’ was the top of the trending searches on Google in the UK with more than 500,000 searches for his name.

Following that very first performance together of “We Are The Champions” in 2009, Queen and Adam Lambert teamed up again in 2011 at the MTV European Music Awards for an electrifying eight-minute finale.