The Adidas Ultrastar 80s Returns In 2017

By now it’s pretty clear that the ’80s style is absolutely timeless. So timeless in fact, that it is continuing to make its return in 2017. Adidas will be bringing back the Adidas Ultrastar 80s in 2017. 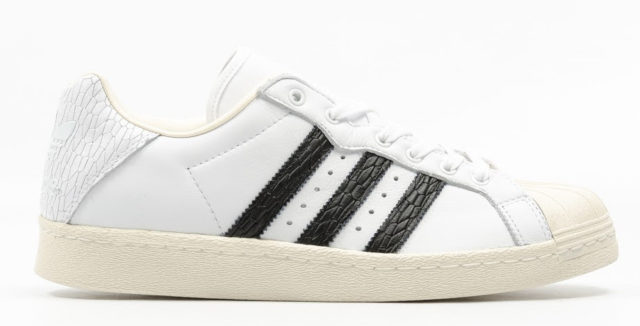 “The shoe is back for 2017 as we take a look at one of the newest colorways to release which features a white leather upper with large adidas trefoil logos on the tongue and heel,” according to KicksOnFire.

“Textured three stripes branding in black on the side panels and an off-white sole unit complete the look on this silhouette that is directly inspired by the classic Superstar.”

The Ultrastar 80s has a lot of note from the Superstar that came in the late 60s and early 70s, however, the wild textured areas on the sneaker are totally 80s. From sunglasses to sneakers, the ’80s fashion scene is still making itself very much relevant in the present.

These blast from the pasts are pretty stylish and the color scheme definitely lends itself to match almost any outfit you could imagine.

Fans of the ’80s sneaker scene know it was much more than the classic Air Jordans and Nike sneakers. Plenty of brands like Adidas were also stepping it up big time and as a result there were some pretty awesome and maybe not-so-awesome pairs that hit the market.

Did you own a pair of the Adidas Ultrastar 80s? Let us know in the comments section below.