Burt Reynolds will attend the upcoming Barrett-Jackson auction in Palm Beach on April 7, joined on stage with a 1974 Chevy Chevelle 454 Laguna S3 that is currently registered to Bandit Movie Cars Florida LLC. Fans will remember the awesome ride from the 1981 film, Cannonball Run. 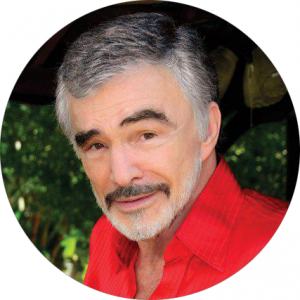 This car has been assigned Lot #449.2 – designating it as a featured car that will be auctioned during Prime Time April 7, 2017 at the Barrett-Jackson auction in Palm Beach, Florida on the Velocity and Discovery Television Networks. Bidding is available Onsite, Online and On Telephone.

This car is a recreation of the Hawaiian Tropic Race car that was driven by Terry Bradshaw and Mel Tillus in the movie Cannonball Run, which starred Burt Reynolds. Many will remember it as the car that “drove into the pool.” This car has been seen in numerous shows throughout the country.

Reynolds will be in attendance on the auction block along with sponsor Restore A Muscle Car, where he’ll meet the car’s new owner and personally sign this 1974 Chevy Chevelle Laguna S3. Reynolds has previously attended Barrett Jackson auctions and has drawn record crowds, while his cars have sold for record amounts.

A true Chevelle Laguna S3 is a rare car to find. This one has the original numbers matching motor and rebuilt turbo 400 transmission. It also has a leather interior with factory swivel bucket seats.  Goodyear NASCAR Eagle one tires, a dual exhaust system with electric cutouts, Hooker headers and Flowmaster mufflers, fiberglass cowl induction hood, Cragar chrome mod wheels, Sony sound system and factory gauges. An overall solid car that runs and drives great!  A fun car to take to local cruises or put in a car collection of celebrity cars. The car is signed by Mr. Burt Reynolds.