The Wonder Years: So Different From Now

Home » The Wonder Years: So Different From Now

The Wonder Years was set in the late 60s/early 70s but aired in the late 80s/early 90s. These decades were more reminiscent of each other than now, mostly because of the (lack of)  technology. As we were beginning to come around to color television and other electronic advances then, the technology of this era is like never before.

With friends that lived down the street and a “typical” American household, the Arnold’s really encompassed growing up during the “80s.” The differences from then to now are so apparent when watching this show, you can’t help but pick up on them.

Dad hands Kevin the newspaper to find a job and you instantly remember that time. Back then, the newspaper had all the good stuff like the classifieds, personal ads, and a paper copy of the latest news. These days, the internet rules job searching with websites, applications, and everything the local newspaper had and more.

To call girls/guys on their parents landlines was the only way of communication back then. There were no cell phones to text your friends or even the chat rooms of the 90s to connect. The telephone, cord and all, was how you would talk to your friends, that or in person.

Don’t steal other school’s mascots, this isn’t what it was during the time of The Wonder Years. It’s no longer a fun joke or prank but more so a breaking and entering charge. And if the mascot is a live animal, the charge could be kidnapping. Do not try this at home!

Letting your kids leave from morning until the streetlights come on with no supervision or contact was the way it was in the 80s. As long as you were out of the house and entertaining yourself, there was no need to check in and keep in contact with your parents.

Talking at the end of your day, about your day, is a thing of the past as well. Constant contact and the details of the day are shared and discussed throughout the morning and afternoon now rather than around the Arnold dinner table. 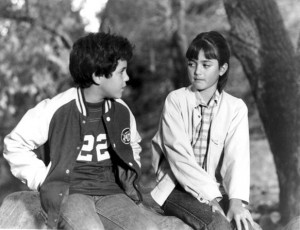 “80s,” without any electronics. Life was arguably less full of distraction without computers, laptops, cell phone and iEverythings. Paul, Kevin, and Winnie talked for hours face to face about the perils of life.

Gifts like can openers and toasters for opening a checking account were what to get excited about back then. And Norma says you could pick whichever gift you wanted out of their options. Come 2017 and it’s a cash incentive to open an account, with stipulations, of course.

Desks without a computer were the norm in this show. Heavy, dense wood desks were seen more typically stacked with papers, a radial telephone with a cord and files or knickknacks.

To show up at someone’s house was common and typical in the older decades. It’d be a chore just to count the number of times that Paul, Winnie, and Kevin just showed up outside each other’s door. If you just showed up on a friend’s doorstep today, it may be construed as rude or unthoughtful to just go over to a friends and knock on the door. Instead of an, “It’s so nice to see you,” you may get a, “What’re you doing here?” Times were different, that’s for sure.

People were closer back then, they talked more and were more connected. The Wonder Years series really pulls you in and makes it yours.