Quiz: How Much Do You Remember About “The Money Pit?”

Home » Quiz: How Much Do You Remember About “The Money Pit?”

What happens when you buy a million dollar house, but you don’t pay a million dollars? Well some may think you have invested in a Money Pit. A whole lot of problems. When Anna and Walter are “kicked out” of their love nest, they have to find something cheap, and quick. They soon realize you get what you pay for when multiple disasters surround their new casa. What are the worst things that could happen if you buy a new house? Well if you take it from them, almost anything.

One of the first things to happen is when the electric fries everything in the house, from making the TV blow up to the black charred lines running through the walls. Walter watches with horror as things slowly but swiftly start on fire, bust, and break from the heat and flames. 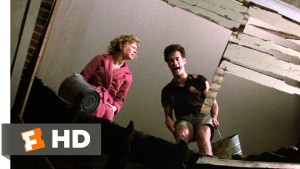 Later in the movie, hoping to relax in a bath together, they fill the tub with a few last buckets of

water just for the tub to fall through the floor and shatter on the level beneath them. The silver lining? Walter’s laugh is nothing if not contagious and really captures the scene.

The workers come into the house and start to work while Anna and Walter leave for the day. The result? They come back to a completely torn up house, inside and out. 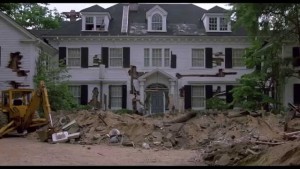 The floors are very weak and therefore create lots of issues. Walter is literally sucked into the 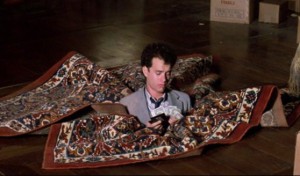 floor along with the carpet and hangs there until Anna made it home. She attempts to pull the carpet up but he ultimately falls through the floor.

Almost ready for bed, they climb in talking when the wind gusts blow the plastic sheets on the windows and they are visibly cold. Walter adds a log to the fire and the whole fireplace and chimney collapse. Used to problems at this point, he just climbs back into bed and shuts off the light.

As happens with so many home projects, the timing is almost always off. In this case, way off. Once the work began,  it was supposed to take weeks but was already going on for 4 months. Several other times in the movie, timing is discussed and they continuously say “2 weeks” even though it arguably took several months to be completed.

And When One Bad Thing Leads to the Next

Some of these scenes are almost unbelievable. The craziest of all the things to happen was a series of events that domino’s after just one step in the wrong direction. Following a bit of legal talk, Walter turns around to walk, misteps, and falls through the floor. At the same time the saw starts again and cuts the wood piece holding the wheelbarrow with bricks which comes crashing down. It falls on a plant that Walter is standing on causing him to be propelled through a window and into paint  He then walks blindly on the roof and stumbles into the chimney that falls into and breaks the structures the men have to work on the house. He finishes by falling into a garbage on wheels which rolls all the way down the hill and into the fountain with the peeing boy. And of course the fountain starts to work and “pees” on Walter’s head. After all that, what a finish.

Lots of people who’ve bought a place to live can relate to The Money Pit. This movie is funny and you can’t miss how gorgeous the house turns out.

Think you remember this movie? Take the quiz to find out: