The 2017 NBA Finals had plenty of drama surrounding it. Though, most would argue it pales in comparison to the NBA rivalry that took place in the 80s between the Boston Celtics and Los Angeles Lakers. They would be right. 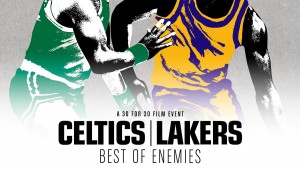 Basketball is a different animal today. There is a lot less animosity between rival players. Fights are broken up almost immediately and those flagrant fouls are a lot less prevalent in the game today.

No, we don”t want to see fights in the NBA but it does make players seem a little soft when they don’t stand up for themselves. Most of what goes down in the NBA today is talk and that really only gets you so far.

Both Johnson and Bird were involved in their fair share of scuffles, so to were their teammates. In fact it was all highlighted in the latest 30 For 30 series from ESPN, cleverly titled, “Celtics/Lakers: Best of Enemies.”

“In that four-year stretch from 1983-84 to 1986-97 where the teams met in the NBA Finals three times, a total of 10 Hall of Fame players were on the floor at some point,” according to SportingNews.

There was a clear divide between these two teams and it made for heavy entertainment for fans. That’s why this rivalry stands out as the greatest rivalry in NBA history. From the looks of today’s NBA, it’s likely that the 80s will be able to hold on to that trophy for plenty of years down the line.