The Long Lost McMenu Items of the 1980s

You’ll laugh when I tell you my favorite thing from McDonalds is the Southwest Salad with crispy chicken from the McMenu, but I’m serious. The combination, and the dressing comes together, making this is a hard salad to beat.

The Long Lost McMenu Items of the 1980s

But the french fries are pretty amazing, and I love their Iced Coffee, too. And to think, some of these things weren’t even available in the 80s. In fact, the menu items McDonald’s offered in the 80s weren’t that extensive at all. But the items to come out in the decade, now those looked good.

The cheeseburger was the start of the McDonalds menu back in 1948, and has remained a popular staple since day one. French Fries, Filet-o-Fish, Big Mac, Quarter Pounder, Egg McMuffin and the Full Breakfast Menu have all been available starting between 1948-1983.

The most popular, (and still available,) items that came out in the 80s includes Chicken McNuggets and the McChicken. These two are still on the menu, and 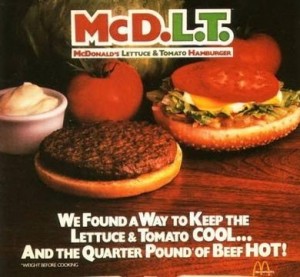 going through (healthy) changes, too. And who doesn’t like chicken?

But these throwback 80s McDonalds items, they will have you reminiscing.

In 1984, the McDLT was released. The premise of this burger was the cool and heat separation by way of the two-sided container. It was then the job of the customer to fold together, and assemble their sandwich for that perfect, first bite. This product was discontinued with growing concerns over styrofoam use and the impact on the environment. 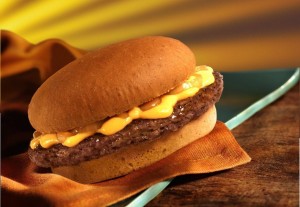 This burger was essentially a Quarter Pounder topped with teriyaki-sauteed onions, and cheddar cheese sauce. The Cheddar Melt has attempted re emergence on the menu throughout the years but is not on there today.

Chef, Garden or Chicken Salad Oriental, these meals toted fresh ingredients, and a delicious lunch. Tossed fresh all day, and starting in 1987, McDonalds never stops trying to be better. Since then salad shakers, and premium salads have been at least a visitor on the menu. 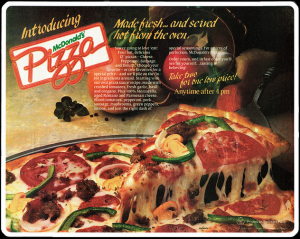 And the year of the McPizza. It was 1989, and the McPizza was McDonalds jump into fast food Italian. The pizzas had dozens of toppings, and promised to be cooked and served in under 5 minutes. Eventually though, even this time was too slow, and the pizzas were discontinued because they took too long to cook.

As for now, it would be fun to see the Cheddar Melt return to the menu, or even to eat a Big Mac again. I know, I know, it’s been on the menu for forever. I just don’t eat there often, and have only had one, one time. However, now that you can get a one, two, or three patty Big Mac, I might have to go try it. Thanks to the McMenu items of the 80s, and the fun look back at the commercials, and ads of the decade.