Vin Diesel and NBC are bringing back the 80s classic Miami Vice. At this point, it’s probably the only 80s TV show that hasn’t been featured in a reboot as yet. Interestingly enough, this reboot could be pretty close to the original. 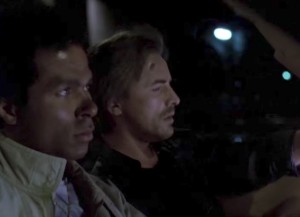 “Vin Diesel will be the executive producer of a Miami Vice reboot according to a Wednesday report from The Hollywood Reporter,” according to DailyMail.

“According to the weekly trade magazine the 50-year-old actor will be teaming with Fast And The Furious writer Chris Morgan for the show which is set to air on NBC.”

It’s about that time to break out the Ray-Ban Wayfarers and start doing your best Don Johnson impression. Miami Vice is on its way back and it is being executive produced by an actor who is part of one of the biggest film franchises of all time.

With the experience from The Fast and The Furious films, Diesel and Morgan sure know how to bring the action. That should be good news for those who got their adrenaline fix from the show.

“The ambitious revival will be the first project to come from Diesel’s company’s deal with Universal Television,” according to the report.

“According to the publication it was all Diesel’s idea to revive Miami Vice as he even made a personal proposal to NBC’s Entertainment president Jennifer Salke.”

Finally, someone is bringing back an 80s show that will totally have us tuning in. Stay tuned for more details on the reboot.

Check Out This Iconic Scene From Miami Vice