Should ‘IT’ Have Featured Freddy Krueger?

Home » Should ‘IT’ Have Featured Freddy Krueger?

What would happen if two of the 80s’ most terrifying figures teamed up against a group of kids? Well, we could have possibly found out had IT director Andy Muschietti committed to his idea. Recent reports claimed that Muschietti played with the thought of having Freddy Krueger make an appearance in the film and it could have been legendary or really bad.

Should ‘IT’ Have Featured Freddy Krueger?

“In an interview with Aint-It-Cool-News (via SyfyWire), It director Andy Muschietti said that he briefly entertained the notion of having Pennywise, who shape shifts based on the fears of his child victims, appear as Freddy Krueger to one of the kids,” according Nerdist.

“Seeing as how It is a new New Line Cinema release, and the A Nightmare On Elm Street franchise is also owned by New Line, getting the rights wouldn’t have been an issue.”

It would have been pretty legendary to have these two characters meet or at least appear in the same film. Though, IT purists may have become enraged at having such a strong introduction to the film. It would very well seem out of place and cause a lot of critics to scratch their heads.

That being said, these crossovers of 80s horror icons has proven to be pretty successful in the past. Take Freddy vs. Jason, which released in 2003. The film featured two very terrifying and demented killers. One haunted you in your dreams and the other haunted you in real life. That meta was pretty interesting and entertaining for horror fans. Though the film was still super campy, it was a legendary concept. 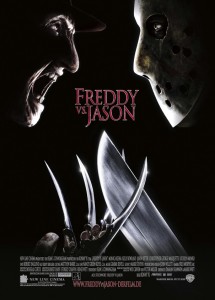 The concept even moved into Mortal Kombat games where horror film characters are now appearing. Those characters include, Jason, Krueger, Leatherface from Texas Chainsaw Massacre, Predator and more. Who knows, maybe Pennywise is on the list of characters for the next Mortal Kombat game? Would Freddy Krueger fit in the IT film? Let us know your thoughts in the comments section below.