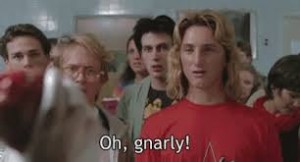 When something is so cool, you just don’t know what to call it, it’s gnarly. Surfer’s love this term.

Dudette, now that’s something I haven’t heard in awhile. Dude is still commonplace and, of course, every dude needs his dudette

Haha, grody. To say something is gross or express “yuck,” grody is it.

Aka, “What’s your problem?” Someone is in a bad mood or has an issue, this is what to fire back with. 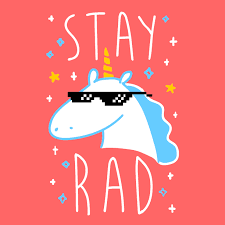 Another word to express cool and awesome. “Rad ride, Dude!”

Don’t like your bosses’ new rules? Your parents trying to give you a curfew? “Bogus.”

For more surfer speak, tubular is it. Sayings like “totally tubular” were perfect for expressing how awesome something was.

Made famous by none other than Bart Simpson, this one makes me laugh every time. I’ve never actually heard anyone say, “Eat my shorts,” but it would be fun to. 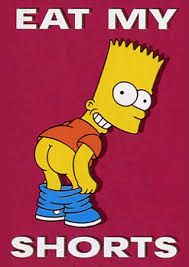 How do you agree in the most 80s way possible? Like Totally! And the name of the site, liketotally80s, is, well, like totally perfect.

Someone you know is a little slow or completely dumbfounded? They’re an airhead.

Need the perfect way to sign a yearbook? “Have a bitch’n summer.” This 80s saying was used in the 90s show, Dawson’s Creek, but it pretty much works through the ages.

What are/were your favorites? Any that should come back? What about the ones that should stay in the 80s? I, like totally, love them all.