The Struggle of Winding A Cassette: 80s Struggles

Home » The Struggle of Winding A Cassette: 80s Struggles

Today, kids use the term, “the struggle is real” when referring to plenty of seemingly “first-world problems.” If they only knew the struggles that were around in the 80s. One of those big struggles include winding a cassette tape. You all know exactly what we’re talking about.

The Struggle of Winding A Cassette: 80s Struggles

Last week, Twitter was on fire with both 80s and 90s struggle according to a DailyMail article.

“While men and women of all ages chimed in, it was children of the ’80s and ’90s who really represented, reminiscing about old technology, trends, and ‘struggles’ that kids today will never know,” according to the report.

“They shared pictures and memories of beepers, cassette tapes, and Scholastic Book Fairs, looking back fondly at favorite pastimes of the pre-internet and early-internet days.” 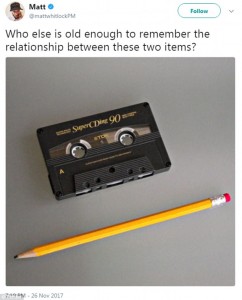 Cassette tapes were quite annoying. If you didn’t have a device that automatically wound the cassette tape, you’d have to do it yourself. It could mean taking your finger if it was small enough and rotating the wheel inside of the cassette until the tape was on the complete opposite wheel.

Though, ingenuity was also born from this. One method that worked like a charm happened to be a good ole number two pencil. Somehow, the grooves in pencils fit perfectly with those in the wheel. you would fasten the pencil inside and turn until you were satisfied.

It didn’t seem too frustrating back them, though the more we think about it, it was a pain! Next time your kid says “the struggle is real” share your experience with cassette tapes with them. They may reconsider.