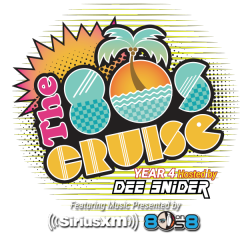 The 80s Cruise will sail again in 2019 with all of the original members of the iconic 80’s synth-pop/rock band Berlin. Terri Nunn, John Crawford, David Diamond and Ric Olsen will appear onstage together again performing a full concert for the first time since 1985. Along with keyboardist Dave Schulz, guitarist Carlton Bost and drummer Chris Olivas, the reunited Berlin will mark their 40th anniversary with two concerts on board the...