The Madonna Look – Strike a Pose 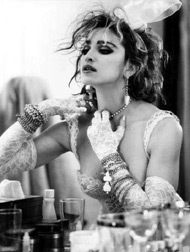 When you think about clothes worn in the 80s, what is the most popular style that comes to mind? Madonna. The pop icon was discovered and elevated to her most popular days in the 1980’s. Her style was the most copied and sought after look. After all, Madonna was omnipresent in 80s culture, appearing on TV in many music videos, on the big screen in movies, on cassettes in every home and car, and in concert.

Madonna had many looks during the 80s. Her ability to perpetually re-style herself has certainly contributed to the longevity of her career. One was her most iconic looks from the 80s was the wavy hair with highlights. Girls went to the salons in droves to get the “poodle” looking perms so their hair was wavy too. They pulled it up in bows like she did to copy her look in the Borderline video and movie, “Desperately Seeking Susan.” A black tank top, skirt, dirty bleached blonde hair and an attitude.

Madonna may be one of the first pioneers of the messy chic look of the 80’s. She started the layered look, with shirts and coats and more shirts. A lace shirt was often worn over another shirt. Or a sweatshirt with an oversized neck or cut off sleeves was worn over a smaller shirt or bra. 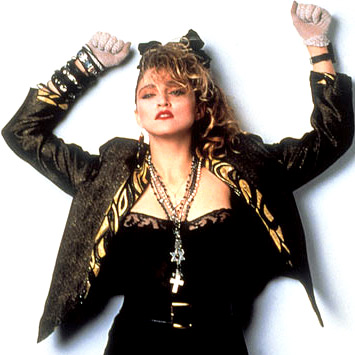 Her layers also included accessories. She wore multiple necklaces and bracelets, some with crosses and other iconography. She also favored pearls and beads. Her earrings were long and dangly, with crosses or religious symbols.

Everyday Madonna clothing of the 80’s included a skirt worn over tight, short pants. Sometimes they were patterned, other times they were lacy. No matter, the girls in school copied them. (The early beginnings of leggings and a look that is back this fall (2006)).

Another of Madonna’s fashion incarnations towards the end of the 80’s (1989 with the release of the Like a Prayer album) was the super sexy vixen style. She wore pointed bustiers, bras and very little else in several videos. She made it a habit to be in shape, and she showed her body off! Madonna changed the fashion industry forever.