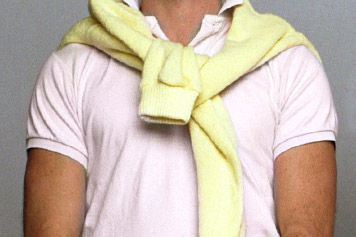 Clothes in the 80s fell in to as many categories as did the people that wore them. There were new wave/punk rockers, Madonna wannabes, hair band devotees and one of the most infamous groups: the preppies. The term “preppie” (also spelled “preppy”) evokes a certain image: popular, smart, and rich. Whatever your impression, Preppies had several main characteristics. Preppies were part of a crowd of college bound kids, deriving the name from the “Prep” schools they attend prior to college. Typically, they were on the straight and narrow and not in with crowds who got into trouble or who didn’t care about life. They wanted to succeed and be on top of their game. There is a close tie between the preppie (or “Richie” as depicted in Pretty in Pink by Blaine and Steff) and the recently post-college Yuppie which came of age in the 80s as well. One such aspect of their life and succeeding meant looking good. Alex P. Keaton on the show ‘Family Ties’ is a great example. He was smart, he was college bound, he cared about the world in general and he cared about his appearance. Appearances were important and kept neat. Clothes worn in the 80s Preppie period included blazers, button down shirts, polo shirts, a sweater casually draped around the shoulders, dress pants, and dress shoes (penny loafers). Traditionally, they were nice clothes. Preppies didn’t follow the trends of ripped clothing, punk rockers, neon, and exercise gurus. They looked to the future and wanted to be taken seriously, and the first step was looking good. Again, think Alex P. Keaton only a little less uptight. LL Bean was a staple of the preppie wardrobe — turtlenecks, duck boots, and rugbys aplenty. Many of the preppie styles for women were similar to their male counterparts, but even so the ladies had their own favorite preppy styles, which included Tretorn tennis shoes, knee high socks (early 80s) with long walking shorts, Laura Ashley dresses (later 80s) and good ole reliable Keds. 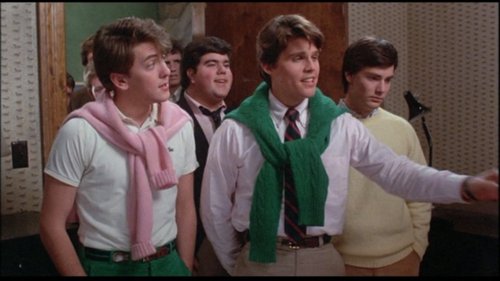 Preppie look in ‘Making the Grade’ from 1984

80s movies illustrate perfectly what people wore in the 80s. Pretty in Pink — Top Gun, Ferris Bueller’s Day Off, Fast Times at Ridgemont High, Girls Just Wanna Have Fun, and The Breakfast Club. These movies typically had at least one character with a colored polo shirt (collar flipped up, of course), sweater or blazer, penny loafer shoes and nice pants.

Preppie done perfectly by Blane in ‘Pretty in Pink’

For some interesting and very funny reading to get you up to speed and ready to be a true preppie, you may want to read The Official Preppy Handbook.