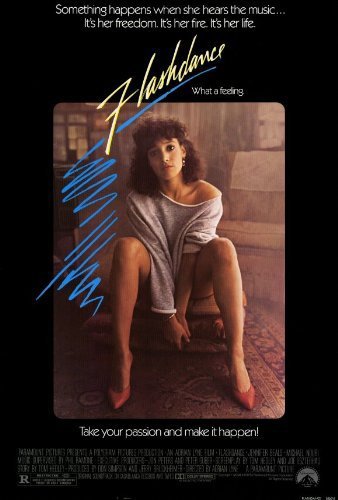 Out of all of the movies released in 1983, Flashdance was probably the hottest. The movie’s plot revolves around Alexandra, a character played by Jennifer Beals. Alexandra leads somewhat of a double life. During the day, she works at a steel mill – at night she’s an exotic dancer. Of course exotic dancing isn’t what she wants to be doing with her life. Alex’s dream is to get a place at an elite dance school in Pittsburgh. It seems as though Flashdance is filled with a cast of dreamers. Jeanie, Alexandra’s best friend, wants to be a professional ice skater and Jeanie’s boyfriend wants to be a professional comedian. Whatever happened to the old-fashioned aspirations of being a doctor or lawyer? Maybe they were just to blasé for the Flashdance movie. While Flashdance may not be full of the white-collar crew, it is definitely filled with one common 80s theme – legwarmers. Yes, Flashdance is one of the reasons legwarmers were such a fashion hit in the 80s. Within the Flashdance plot you have the basic “boy meets girl, boy gets girl, boy pulls strings to help girl” thing going on, but it plays out well. There are a bit of twists and turns, such as Alex finding out her boyfriend has an ex-wife, her ballet teacher dying and the fact that she has to stop Jeanie from dancing in the nude at an adult establishment. At the end of Flashdance, Alex finally gets her audition at the school of her dreams (thanks to the strings pulled by her boyfriend). Surprisingly, we never find out whether or not Alex actually gets into the school. The ending shows Alex running into the arms of her boyfriend with a smile on her face (and he has roses waiting for her) but it is never said whether or not she actually gets in. I guess Flashdance fans just get to picture the ending of their choice in their own imaginations.

Jennifer Beals’ trend setting collarless sweater came about by accident. The sweater, which Beals brought from home, had shrunk in the wash and she had to cut the collar off in order to get it over her head. (Source: www.imdb.com) Watch the Maniac video here. You won’t be sorry. Be a maniac and get one of these awesome Flashdance t-shirts.