The fortune-telling game of pre-teen girls in the 80s.

Oh, the hours whiled away figuring out just who I’d marry, where we’d live, how many kids we’d have, the kind of car I’d drive and so on. Strangely, this game did not accurately predict that I would live in the South, have one child and drive a Nissan Murano (navy) and work on the Internet – oh well. They didn’t have Nissan Muranos in 1983 – or the Internet for that matter. BUT, even with its dubious scientific creds, this is the greatest of girl games – M.A.S.H.

You remember the game. It stood for Mansion, Apartment, Shack, and House and promised to unlock the secrets of your future. 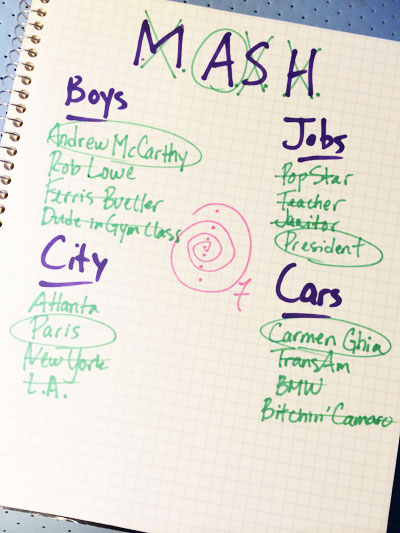 In case it’s been a while since you played, we’ll supply the basic rules for you. One word of caution: there may be regional differences in how the game was played. In comparing my MASHing experience with a friend I was able to see some small regional variations between her Alabama version of the game and the Texas version I grew up with. Even so, the essence remains the same. And, if you are feeling a little lost and need some definite direction, M.A.S.H. can set you straight.

1. Write down five each of the following: names, types of cars, colors, number of children, places, and careers.

2. Then, one person starts drawing a spiral on a piece of paper and the person whose fortune is being told tells her when to stop.  Then, you count across the spiral top to bottom to get the magic number for the game.

3. Alright, now all you do is count through your lists of items AND the letters M-A-S-H, eliminating the ones that you land on with your magic number.  The last one left in each group is your winner.  Keep counting through until you have only your last choice in each category left – et viola – your future.

Here is some additional information about the game: http://en.wikipedia.org/wiki/MASH_(game)

As I make my way through the new season of ‘Orange is the New Black’ (not much else that’s constructive will happen in my life until I finish it), I was thrilled to run across M.A.S.H. in episode seven.  Lest you think this magical fortune telling device was left behind in the 80s,  it comes back to life and predicts the post-prison life prospects of our favorite inmates.  As the gals at Litchfield Correctional explore various types of magic (Santeria from the gals in the kitchen and unspecified magical mojo from Norma), it seemed the logical time to bring in the ultimate  in fortune telling tools: M.A.S.H.  As if OITNB needed anything to make it better.

Play MASH on Like Totally 80s and re-capture your pre-pubescent self! OR, better yet, buy the MASH app for the iTouch, iPad, or iPhone here. 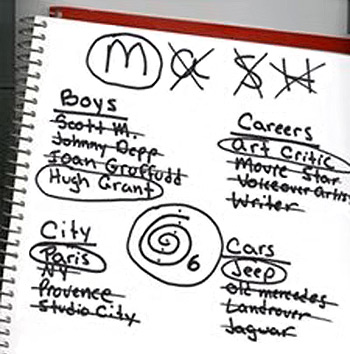