The advances in technology that began in previous years continue to gain speed in 1982 with the release of the Commodore 64 computer and the first CD player by Sony. The shift is so significant that Time Magazine names The Computer as the person of year in 1982. Other big news items include the opening of Epcot Center, the dedication of the Vietnam Veterans Memorial, the Tylenol scare, the death of John Belushi, and the birth of Prince William. It was a great year in movies with ET, Fast Times, the Wall all at the box office. Olivia Newton John had us getting physical and Joan Jett had us loving rock n roll. But, Michael Jackson ruled the music scene and the airwaves with Thriller, which became the best selling album of all in time. 1982 . . . we embrace you with Open Arms.

Cheers
Starring: Ted Danson, Rhea Perlman, George Wendt, John Ratzenberger, & Shelley Long
The regulars of the Boston bar Cheers share their experiences and lives with each other while drinking or working at the bar where everybody knows your name.

Knight Rider
Starring: David Hasselhoff, William Daniels as the voice of K.I.T.T., Edward Mulhare, & Patricia McPherson
Michael Long is a crime fighter who is seriously wounded during his work. Nursed back to health by a mysterious benefactor, he regains consciousness as a new man with a new face and a new name: Michael Knight. His mysterious benefactor provides Michael with equipment and support so that he can continue his crime fighting work. The most notable piece of equipment supplied, is “K.I.T.T.”, a high-performance sports car fitted with artificial intelligence.

Fame
Starring: Debbie Allen, Gene Anthony Ray, Carlo Imperato, Erica Gimpel, Valerie Landsburg, Lee Curreri, Carol Mayo Jenkins, Ann Nelson, & Albert Hague
The Art School was always their dream. They want to dance, they want to sing, to play music, to act but above all they want to live their lives while they are still young and full of energy. Leroy, Danny, Jesse, Chris, Coco and all the others try hard because they know that they’ve got a long way to go till they reach fame and riches. Fame costs and here (the Art School) is where they start paying for it.

Cagney & Lacey
Starring: Tyne Daly & Sharon Gless
Two female police detectives cooperate with each other both in their professions and in their personal lives. 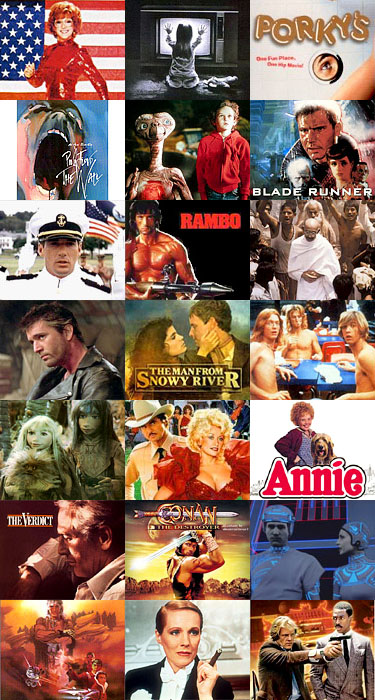 E.T. the Extra-Terrestrial
Starring: Henry Thomas, Dee Wallace, Drew Barrymore, Peter Coyote, Robert MacNaughton, K.C. Martel, Sean Frye, & C. Thomas Howell
While visiting the Earth at Night, a group of alien botanists is discovered and disturbed by an approaching human task force. Because of the more than hasty take-off, one of the visitors is left behind. The alien is found by a 10 year old boy, Elliot. While E.T. slowly gets acquainted with Elliot’s brother Michael, his sister Gertie as well as with Earth customs, members of the task force work day and night to track down the whereabouts of Earth’s first visitor from Outer Space. The wish to go home again is strong in E.T. & he starts building a device to send a message home. Before long, E.T. gets seriously sick, and because of his special connection to Elliot, the young boy suffers, too. The situation gets critical when the task force finally intervenes. By then, all help may already be too late, and there’s no alien spaceship in sight.

Tootsie
Starring: Dustin Hoffman, Jessica Lange, Teri Garr, & Dabney Coleman
An unemployed actor with a reputation for being difficult disguises himself as a woman to get a role in a soap opera.

An Officer and a Gentleman
Starring: Richard Gere, Debra Winger, David Keith
A young man must complete his work at a Navy Flight school to become an aviator, with the help of a tough gunnery sergeant and his new girlfriend.

Porky’s
Set in 1954, a group of Florida high schoolers seek out to lose their virginity which leads them to seek revenge on a sleazy nightclub owner and his redneck sheriff brother for harassing them.

Star Trek II: The Wrath of Khan
Starring: William Shatner, Leonard Nimoy, DeForest Kelley, James Doohan, Walter Koenig, George Takei, Nichelle Nichols, & Ricardo Montalban
Admiral James T. Kirk is still in charge of a space fleet, but from behind a desk. Dr. McCoy and Mr. Spock convince him to take on a mission which sounds simple, but with the appearance of the mysterious Khan, things get a little tricky.

48 HRS.
Starring: Nick Nolte & Eddie Murphy
A hard-nosed cop reluctantly teams up with a wise-cracking criminal temporarily paroled to him, in order to track down a killer.

Poltergeist
Starring: Craig T. Nelson, JoBeth Williams, Heather O’Rourke
A young family are visited by ghosts in their home. At first the ghosts appear friendly, moving objects around the house to the amusement of everyone, then they turn nasty and start to terrorize the family before they “kidnap” the youngest daughter.

Annie
Starring: Albert Finney, Carol Burnett, Tim Curry, Bernadette Peters, Aileen Quinn
In the depths of the 1930’s, Annie is a fiery young orphan girl who must live in a miserable orphanage run by the tyrannical Miss Hannigan. Her seemingly hopeless situation changes dramatically when she is selected to spend a short time at the residence of the wealthy munitions industrialist, Oliver Warbucks. Quickly, she charms the hearts of the household staff and even the seemingly cold-hearted Warbucks cannot help but learn to love this wonderful girl. He decides to help Annie find her long lost parents by offering a reward if they would come to him and prove their identity. However, Miss Hannigan, her evil brother, Rooster, and a female accomplice, plan to impersonate those people to get the reward for themselves which put Annie in great danger.

The Verdict
Starring: Paul Newman
A lawyer sees the chance to salvage his career and self-respect by taking a medical malpractice case to trial rather than settling.

Gandhi
Starring: Ben Kingsley
Biography of Mahatma Gandhi, the lawyer who became the famed leader of the Indian revolts against the British through his philosophy of non-violent protest.

First Blood
Starring: Sylvester Stallone as John Rambo
A mentally unstable Vietnam war vet, when abused with a small town’s police force, begins a one man war with it.

The Dark Crystal
Another planet, another time. 1000 years ago the Dark Crystal was damaged by one of the Urskeks and an age of chaos began. Now the time of the great conjunction of the three suns is near. If the crystal is not healed now the control of the evil Skekses will last forever. Jen the last of the Gelflings nearly exterminated by monsters controlled by the Skekses starts his dangerous journey to find the missing shard of the crystal. Will he be able to heal the crystal and restore order on the planet?

Tron
Starring: Jeff Bridges, Bruce Boxleitner, David Warner, Cindy Morgan
A hacker is literally abducted into the world of a computer and forced to participate in gladiatorial games where his only chance of escape is with the help of a heroic security program.

Blade Runner
Starring: Harrision Ford, Rutger Hauer, Sean Young, Edward James Olmos
Deckard, a blade runner, has to track down and terminate 4 replicants who hijacked a ship in space and have returned to earth seeking their maker.

Fast Times at Ridgemont High
Starring: Sean Penn, Jennifer Jason Leigh, Judge Reinhold, Phoebe Cates, Brian Backer, Rober Romanus, Eric Stoltz, Anthony Edwards, Ray Walston
Follows a group of high school students growing up in southern California, based on the real-life adventures chronicled by Cameron Crowe. Stacy Hamilton and Mark Ratner are looking for a love interest, and are helped along by their older classmates, Linda Barrett and Mike Damone, respectively. The center of the film is held by Jeff Spicoli, a perpetually stoned surfer dude who faces off with the resolute Mr. Hand, who is convinced that everyone is on dope.

Pink Floyd: The Wall
A troubled rock star descends into madness in the midst of his physical and social isolation from everyone.

The Man from Snowy River
The story of a boy suddenly alone in the world. The men who challenge him. And the girl who helps him become a man.