We all know the Rubik’s Cube and Atari and Cabbage Patch Kids reigned supreme on toy shelves in the 80s… but the following are 5 fun toys that played second fiddle, but were first in my heart.

“Pillow People are lovable . . . Pillow People are huggable. Pillow People are lovable, huggable, friends.” Ahhh — what a jingle. When your Cabbage Patch Kid wasn’t taking up the rest time real estate on your bed, your Pillow People pal could sneak in for some snuggling. They even had names: Mr. Sandman (the one that looked stoned), Pillow Fighter (apparently pillows can pick on other pillows and beat them to a pillowy pulp) and many others. You could have all the fun of drooling on a face, without all the embarrassment of realizing you had done so. 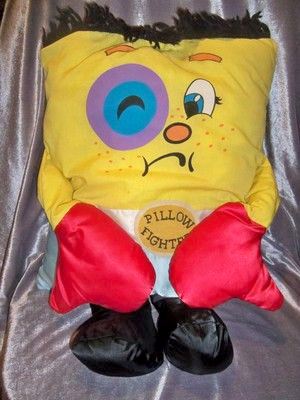 C&C put a bit more structure in just building stuff and knocking it down. You were given little plastic blocks, that resembled pieces of a wall, and you were responsible for building a sturdy wall around your castle to protect it from being attacked by your opponent. You could attack via two ways — shockingly — by crossbow or catapult. The crossbow, constructed of plastic and a rubber band, shot your ammo quickly along the ground—while the catapult, my weapon of choice, allowed you to fling your ammo high into the air, and then have it land on your opponent’s defenses. I believe C&C partnered with local bars in order to train young children into one day being truly great Quarters players. Seriously. . . . It’s the same concept. It worked for me. . . . I lettered in “Quarters” in high school. 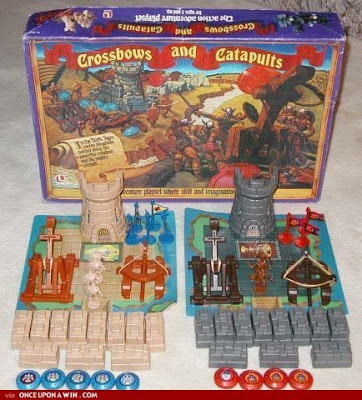 What resembled an oversized booger with legs, the Wacky Wall Walker was a huge hit. If you didn’t find one in your cereal box, you could hunt one down in stores. You would take your Octopus-esque creature, fling it onto the wall or window and it would make a splat sound that would always induce a child to laughter. It would slowly make its way down the wall, about 2 feet, and then usually plummet to the carpet. You would then spend hours de-hairing your Walker so it would stick properly again when thrown. The instructions always said you could wash it with soap and it would be as good as new. . . . lies — all LIES! I think that was made up, so you would just have to go out and buy another one. . . . It worked, though — every time — I never learned. 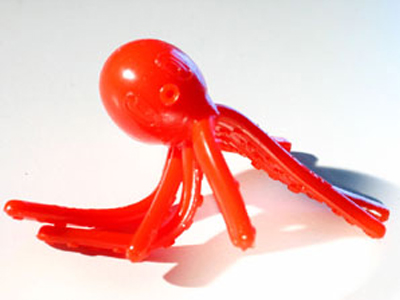 For the kids that couldn’t afford “Laser Tag”, there was Photon. Laser Tag had a gun and a target. . . . Photon had a gun, a target, and a massively oversized helmet, connected to a long spiral cord, which then connected to a chest plate. . . . oh, and there were belts too. It actually worked in conjunction with Laser Tag, so if you had friends with Laser Tag, you could play with them—of course, they would look halfway normal and you would be the Robo-Tool chasing after them. Photon was for those boys that really didn’t care about girls. . . . Because they definitely weren’t attracting any of them wearing this spacesuit and running, diving, and army crawling out in their yard. 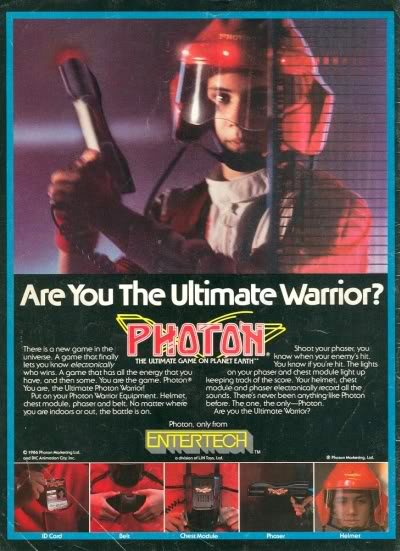 No Atari? No problem — ColecoVision to the rescue! You could play QBert, Donkey Kong, Frogger . . . all the classics on this bad boy. The controller resembled a large phone handset, complete with numbers and buttons and a joystick. I played this thing over and over and over. . . . I loved my Coleco. . . . Until the 8 bit Nintendo came out. My dad told me that I couldn’t get a Nintendo, because I had a perfectly working ColecoVision. . . . So what’s an 10 year old to do? Take a screwdriver, stick it in the circuit board, poke around a bit, and voila! — the Coleco is broke. . . . I told my dad it wasn’t working right — he verified — and off we went to get a Nintendo. (Again, Sorry Dad).