Like, Ok. So, this is like a study in 80s slang. I mean, like, the way people talked in the 80s – like, the phrases they used. Ya know? It all started in Cali – I mean, doesn’t everything? In the Valley – the San Fernando Valley, where, like the girls talked a certain way, ya know? Valley Girls.

Seriously, what defined 80s slang? What phrases mark the uniquely 80s way of speaking? This was an era long before emoticons and text-speak – LOL. OMG – I’m LMAO. Really. In the 80s, everything needed a superlative – like a really totally awesome superlative, like, radical and bitchin’ and tubular. I mean, it was a decade that was so kickin’ that it deserved over-the-top superlatives, right? So, here’s the Like Totally 80s run down on 80s slang – your own personal 80s slangionary. Word.

Michael Jackson appropriated this term for the title of his 1987 album, but in reality it had been in use since the 1960’s when James Brown proclaimed himself to be “superbad.” The word stayed largely within the African American community throughout the 70’s until the 80’s saw everyone adopt it as their term for describing someone or something that was cooler than the word cool could adequately convey. ‘That is one bad locker door, Brenda!’

Valley girl speak for: “Your face is so unattractive and disturbing to me that I’d like to you wear a paper sack for my own personal comfort.” A totally harsh put-down, one wanted to save it for when it was truly called for. “Monica, your orange eyeshadow totally clashes with your pink shirt, and you have got a monster zit on your nose! Oh my God, bag your face!”

A phrase used to react to a particularly offensive comment, remark or piece of news, which can trace its use back to the very first time a Valley Girl said, “Janis is dating Steve? Like barf me out!”

Like body – get it? Not particularly original but stemming from the California surf culture that gave the 80’s so many of its unique words and phrases. Can be combined alliteratively as in “what a bodacious bod, man!”

Long associated with Bart Simpson, this particular insult actually traces back even further and probably first hit pop culture through the movie “The Breakfast Club”. It was typically used as a comeback:

A popular phrase used to disagree with someone, not quite rude but meant to convey a strong opinion. Of course, saying “not even” left one open to the insurmountable comeback of “even!”, which usually stopped the conversation dead in its tracks.

Gag Me With a Spoon

Gnarly is an interesting piece of 80’s slang that came from surf culture but had its meaning shift over the years. Originally, gnarly was applied to something that was tough or a bit ragged, particularly a set of towering waves or a skateboard trick gone wrong. “Did you see his arm after he ate it hard on that half-pipe? Gnarly, man.” Gradually, however, it took on a new meaning as a way to describe something good. “Gnarly pad you’ve got man. I’m totally stoked for tonight’s party.” Today, the word gnarly lives on, and can bear either meaning depending upon the situation.

Grody to the Max

This little etymological nugget will always have a soft spot in my heart. It is used by Loryn (well, a version of it anyway) in the opening scene of the best all time 80s movie, Valley Girl. This phrase communicates that something is gross and distasteful and just ought not to exist. Think of that dude sitting one row up and over from you in 9th grade history class and his totally cheesy peach-fuzz mustache, complimented by his mullet and muscle shirt – that is like, grody to the max!

Teenagers didn’t invent sarcasm in the eighties (Duh!) but they sure weren’t afraid to employ it. “I’m Sure” and “I’m So Sure” were the verbal equivalent of an eye roll, and were often delivered with one. In essence, it meant, “What you’re saying is ridiculous,” although it also meant, “What I am witnessing or hearing is totally lame.” The nineties equivalent of this phrase, by the way, is “What-ever!”

“Oh my God, Heather, that poser leaning against the food court entrance totally just asked me out! As if! Did you see his butt-cut hair?”

The most ubiquitous slang term to have originated in the 80s, like is a word which has managed to go the distance and work its way into the daily vocabulary of every generation of teenager to have been spawned since. Like is so infinitely malleable that it replaced “um” amongst Valley Girls and served to punctuate every expression, sentence or exclamation. “Like, did he like totally just like hang up on you? That is like, just like the height of like disrespect. Like, will you like dump him now or like after he takes you the dance of Friday?”

This is a verb: to motor, meaning “got to go.”
Example: I’ve got to motor if I’m going to get home in time to watch Headbanger’s Ball.

Another interesting 80’s phrase with a deep past. The word “duh” had been used to express bewilderment or ignorance since the 70’s, but adding “no” to the front created a sarcastic expression that points out the obvious. Replying ‘no duh’ to a statement made my another showed that you were way ahead of them when it came to putting things together.

“Psych!” imparted a negative meaning to what was just said. It was pronounced with a high-pitched, shrill emphasis, the better to irritate the listener.

Debbie was totally psyched when Tonya twisted her ankle before the homecoming game, because it meant that now she got to be head cheerleader.

Can also be with the word “out” to mean throw off, confuse, or intimidate:

Misty donned her studded black leather jacket and streaked her hair neon green before the debate meet order to psych out her opponents.

An offshoot of awesome. “Radical” meant that it was awesome, of course, but also edgy and bold. A slightly tougher, grittier, more modern version of “awesome”.

Perhaps the most famous use of this 80s slang term is from Ferris Bueller’s Day Off when Grace, the school secretary, is describing all the school cliques that love Ferris, “They think he’s a righteous dude.”

Relax, cool out, calm down. A favorite term for Valley Girls to use when faced with a negative reaction from their posse of friends or when someone is freaking out for no reason. “Take a chill pill, Denise, I’m sure he’ll call you back when he gets home from work.”

Totally comes from the same root as righteous, except that it can be applied in far more situations. Totally flourishes when it is time to stress just how incredibly cool, gnarly, bodacious, groovy or tubular something really is. “That surfboard is totally awesome, man.”
Totally Can also be pronounced with an extended first syllable to indicate an especially “totally” moment. “Mark just bought this toooh-tally bitchin’ Camaro.”

Tubular is the adjective that 80’s teens turned to when the word cool just wasn’t enough. It implies a coolness that surpasses the word. “Bananarama were cool, but the Bangles are tubular, dude! Toooh-tally tubular!”

Simply put, it’s the phrase “what’s your problem?” stuffed into a time machine and sent back to the era when Heathers ruled the box office. It can also be used to imply that someone else is an idiot for having a specific opinion, or for doing a certain thing: “You like Wham! but not Tony Basil? What’s your damage?”

One of the many snippets of 80’s slang to have originated from television, “where’s the beef?” was taken from a series of Wendy’s hamburger chain commercials where an elderly granny complained about the size of her portion after lifting up her burger bun to investigate. The term eventually expanded and was used as a way to indicating that something important was missing from a situation or product. “Where’s the beef” didn’t survive the 90’s, but its memory lives on. “This movie bites, dude – where’s the beef?”

80s Slang Goodness in a Poster

We’d like to extend a hearty and heartfelt ‘thank you’ to the folks at Charley Chartwell for creating this bitchin’ poster explaining the finer points of 80s slang. It can be yours for the low, low price of $20 here. 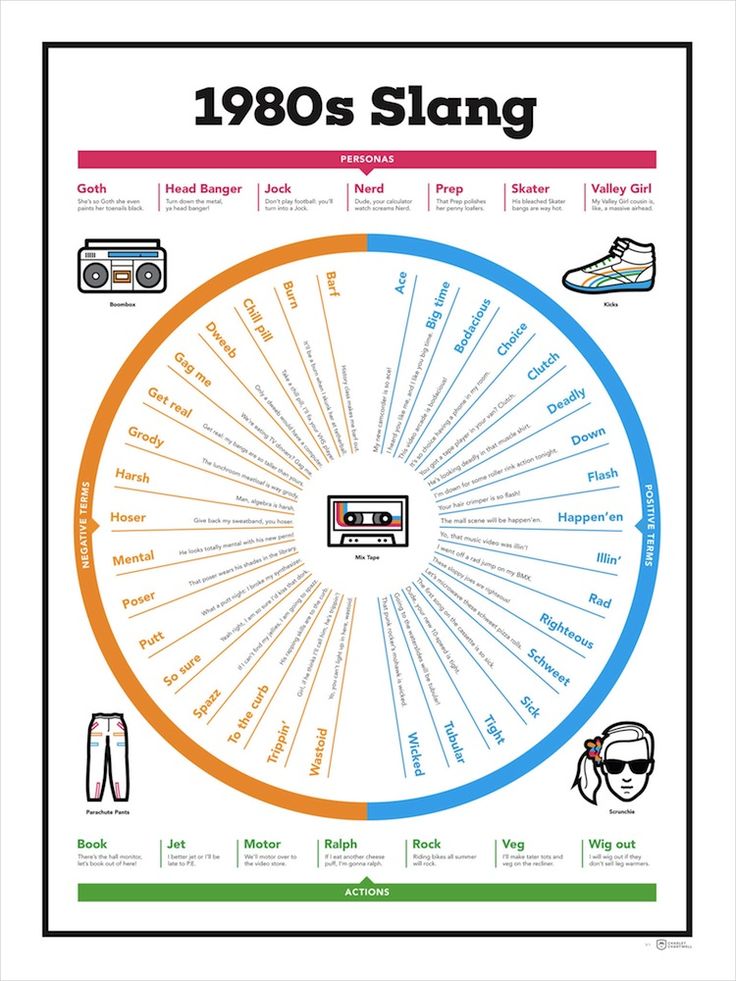