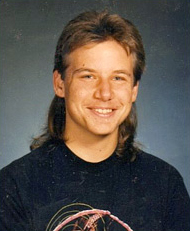 Mullets may have received a bad rap through the decades, but back in the day . . . oh . . . so dreamy. John Stamos put the Hot Hot Hot in mullets in the mid-80s, giving the rocker-turned-redneck style enough oomph to achy breaky its way into the next decade. But nine out of ten valley girls agree, a man who can really pull off the mullet look is a bad to the bone stud-o-rama. Like, totally.

Imagine the scene. You still have 45 minutes until curfew and you are out with your boyfriend. You’ve been waiting all night to be alone so you could run your fingers through his long, flowing mullet. Something totally awesome like “Open Arms” is playing in the background on the car radio. Yup, that’s the mullet for ya — making out in the back of a Camaro while the scent of Polo cologne surrounds you. But, I digress.

Another fantastic version of the 80s rocker mullet is found in the band Glass Tiger. In this picture, all five band members are sporting really impressive iterations of big-80s-man-hair with the locks flowing long down the neck. Finally, Howard Jones can boast his own spectacular 80s mullet. Really, this look was so ubiquitous that it is frankly hard to narrow in on just a few examples, but we feel this demonstrates the awesomeness of the 80s rocker mullet.

Learn more about Hairstyles of the 80s!